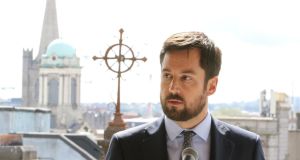 Minister for Housing Eoghan Murphy: his department said the 300km limit appeared to be an attempt “to include everyone (or almost everyone) with an interest in applying”. Photograph: Nick Bradshaw

Fewer families will be able to buy affordable homes in Dublin after city councillors agreed to restrict eligibility criteria for the new discount housing purchase scheme.

Dublin City Council is seeking developers for almost 400 homes on three sites in the city, which will be offered for sale to qualifying low-and-middle-income workers at prices starting from €116,000.

The 370 houses and apartments in Ballymun and Ballyfermot are set to be the first of several thousand affordable homes for sale across Dublin city, Dún Laoghaire, South Dublin and Fingal.

Councillors across all four local authorities in May approved the “scheme of priority”, which determines how prospective buyers will be chosen.

While eligible applicants living in the council area for at least 12 months will be first in line for the available homes, any remaining homes would be offered to applicants who had a child in an educational institution within a set distance of the property and then those who also had a household member with a job a set distance from the house.

To open the scheme to as many applicants as possible, including those who have had to move outside Dublin because of high rents in the capital, Dublin City Councillors voted in May that the school and job distances would be set at up to 300km from the capital.

Determining these distances was the only change councillors had the power to make to the scheme, with the remainder of its terms set by the Department of Housing.

However, Minister for Housing Eoghan Murphy has refused to approve the council’s scheme.

In a statement on Monday, his department said the 300km limit appeared to be an attempt “to include everyone (or almost everyone) with an interest in applying”. The effect of this would be to remove “any capacity for prioritisation based on educational location/workplace distances”.

The statement continued: “The Minister was not in a position to approve the draft scheme of priority as it appeared to be inconsistent with the legislation.”

Councillors on Monday agreed to reduce the distances to 30km from schools and 50km from workplaces. Councillors also agreed, following a motion by People Before Profit councillor Tina MacVeigh, to write to Mr Murphy asking that a new category be introduced to include applicants with a “local connection, such as a family association”, a previous work or community connection, or an offer of employment in the city.

However, it is likely that this would also require legislative change.

In January 2018, the Government announced plans to use public land for the State’s first affordable housing purchase scheme since 2011. However, following the drafting of legislation, the draft eligibility criteria were only issued in recent months.

Homes will be aimed at workers who cannot secure mortgages to buy on the open market, but do not qualify for social housing. Single applicants must earn less than €50,000, while the limit for a couple will be €75,000. Once the homes are built, they will be sold to qualifying buyers at a discount of up to 40 per cent on market rates.