Dublin Docklands: is the area a victim of too much success?

Most workers unable to buy or rent in locality due to rising costs, says Owen Keegan 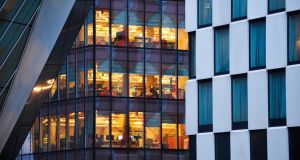 Most workers could not aspire to rent or buy in the docklands and in many cases the council could acquire two social homes outside the area for the price of one docklands apartment, he said.

Mr Keegan was responding to Karlin Lillington’s Net Resultscolumn in Thursday’s Irish Times in which she warned that Dublin was in danger of developing similar housing problems to San Francisco, with tech companies displacing existing populations.

“The article raises legitimate issues and there’s a lot in it I couldn’t dispute. There is undoubtedly a problem with housing in the docklands,” said Mr Keegan.

The dearth of social and affordable housing in the docklands was “doubly disappointing” given that docklands was at one point publicly owned land he said.

It was incorrect to say the council was acquiring no social housing in the docklands, but he said “in some cases the type of unit is just not appropriate. We can’t really control the spec and so you could be paying the type of prices that would house two families elsewhere.”

It was not the council’s preference to take “off-site” housing, he said, and in most cases it tried to source homes close to the docklands.

However, he said the economic success of the docklands and the jobs that had been created should not be forgotten. “Too much success is almost as intractable a problem as failure. Ten years ago we would have given our right, and left, arm for the jobs in the docklands.”

Graham McQueen, of business organisation Dublin Chamber, said Dublin’s economy and by extension the national economy, needed the multinationals based in the docklands.

“These are fantastic jobs that we as a city have been able to attract. If these big companies did not come to Dublin they would go to other European cities.”

The need for affordable housing was, he said, “the biggest issue companies talk about. And we do need to get to grips with that, but not everyone working in the docklands wants to live in the docklands.”

Transport projects such as MetroLink would put areas of high employment in the city centre, such as the docklands, within easy reach of commuters on the outskirts of north Dublin.

“We will also have what may be the best space for the future development of housing right next to the docklands in the Poolbeg [Strategic Development Zone].”

Dublin could learn lessons from San Francisco, he said.

“It is important that while we grow we retain what is unique about us – that we keep the good stuff, keep our identity and our sense of history and we don’t lose the character of Dublin.”

Tommy Byrne has lived on Mayor Street Upper, once a quiet cul-de-sac, for more than 40 years. He says that for much of that time, he and his neighbours have been “under constant siege” from development.

“I am not here to stop progression but they have turned this into a rat run,” he says.

The area has lost its community feel, he says, as locals moved on, green space was snapped up and pubs were bought out. The flashy bars and restaurants of the docklands do not interest Byrne, who pines for a “good, local pub”.

“I would have to remortgage my house to buy a pint in this area,” he adds.

Sitting in his front garden on the corner of Guild Street, Declan Byrne (57) says he was  reared in the docklands “back when it was a slum”.

The neighbourhood is unrecognisable now, he says. “If my father was dropped down here tomorrow he would not know where he was. This could be Brazil for all he’d know.”

He says those born locally, many living in council houses, have not felt the benefits of the area changing. “It feels like a dumping ground. They have come in and broken up all of our history.”

A turn away from the main road in the North Wall area, little has changed during the regeneration years, says Amy Teeling (26).

Having grown up in a council flat in North Wall, she believes the changes have been “largely positive”.

“It is lovely going around there now, but it is completely different,” she says. “There would be no mixing between the people here and there.”