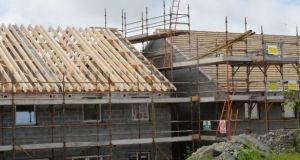 Housing bodies will “inevitably” provide less social housing in the coming years because of a decision to put the sector on the Government’s balance sheet, an Oireachtas committee has heard.

Not for profit housing organisations last year provided almost 40 per cent of the State’s social housing with 3,219 homes built, bought or leased in 2018.

However representatives of these organisations told an Oireachtas housing committee that they were at serious risk of not being able to provide homes into the future because of a “reclassification” which meant their borrowings would be State debts.

In March 2018 the European statistics agency Eurostat, following an analysis by the Irish Central Statistics Office (CSO), reclassified 14 of the largest Irish housing bodies as a subsector of local government, where previously they had been in a category of “non-profit institutions serving households”.

The effect of this change was that even when they independently secured finance from banks, that spending would go on the Government’s balance sheet. While this did not have an immediate effect on the sector, because funding was already in place for projects under development, it means that in future the sector would be competing with other Government priorities, such as the national children’s hospital, for funding.

“This will have negative consequences for the funding of Approved Housing Bodies, in the medium to long-term, limiting the capacity of Housing Alliance members to source funds from Government or external sources,” Declan Dunne, chairman of the Housing Alliance which represents the six largest housing bodies said.

“This will inevitably, over the next couple of years result in a reduction in social housing output provided by Approved Housing Bodies.”

Minister for Housing Eoghan Murphy has supported returning the housing organisations to their original classification, Mr Dunne said, but in the last year there has been little progress in securing the reversal of the Eurostat decision.

“The urgency is very real and very immediate but I think it would be fair to say when this judgment came down initially many of us would have been of the view that we did have time because there was significant funding in place. We are in the position where that window is closing.”

Donal McManus chief executive of the Irish Council for Social Housing said the vast majority of housing associations in other member states remained off balance sheet. Changes in legislation, regulation and financing could be implemented to allow the reclassification decision to be reversed, and the sector had requested a working group be set up to explore these issues, Mr McManus said.

However, he said, “we believe there has been little concrete progress we can see in relation to undertaking a thorough review of the decision or a change management programme to reverse it”.