‘The drivers of most vehicles showed little respect for cycling’ 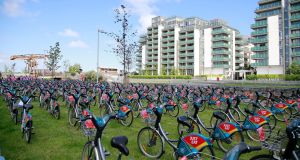 Dublin City Council hosted the Velo-City cycling conference in June. This image shows the beginning of the bike parade which went from Sherif Street to Raheny. Photograph. Nick Bradshaw

Inhaling motor fumes, weaving in and out of gridlocked cars and coming within centimetres of speeding vehicles were the defining characteristics of Mark Wagenbuur’s cycling experience in Dublin.

Writing on his Bicycle Dutch blog, the Dutch Cycling Ambassador said that cycling in Dublin left him “genuinely fearing for [HIS]life”, and has called on city authorities to tackle “the free reign of moterdom in the city centre”. Mr Wagenbuur said he spent his time in the city “constantly looking over my shoulder, the right one this time, scanning the surroundings”.

He said that, despite a large number of people in Dublin preferring bikes to cars, cycling infrastructure is planned and developed around motorists.

Mr Wagenbuur was in Dublin for the four-day Velo City conference, the annual international summit of the European Cyclists’ Federation. He described how visiting delegates were largely disappointed with the lack of progress in Dublin since the summit was last held there in 2005.

“I couldn’t remember when I last felt afraid on my bicycle. Not just anxious, but genuinely fearing for my life. I do now, after I cycled in Dublin last week,” Mr Wagenbuur wrote.

“The 4-kilometre-long ride from my hotel near the Phoenix Park Gate to the Conference Centre of Dublin was just one long straight line on the quays of the river Liffey. The route couldn’t be easier. According to plans from 2011 there was supposed to be a cycle route here, but there wasn’t. Instead, there were multiple lanes for motor traffic.

“The drivers of most vehicles showed little respect for cycling. I can’t tell you what was worse; the quays during rush hour, with the many large vehicles that you had to find (and fight) your way through, or the quays outside rush hour, with motor traffic passing just centimetres from you at incredibly high speeds.” he added.

The federation’s annual cycle parade took delegates along a section the Sutton to Sandycove track - one of the small stretches of cycle lane that have been built. Further plans, amounting to over 2,000 kilometres of cycle tracks, remain in developmental limbo. Using the hashtag #TheGoodRoom, Twitter users remarked that, much like the old custom of Irish homes having a ‘good room’ in the house for important visitors, this parade was far from a true representation of the overall cycling experience in Dublin.

A spokesperson for I BIKE Dublin, a lobby group for the development of the city’s cycling infrastructure, said Wagenburr’s article “echoes the issues repeatedly raised by Dubliners for many years”.

They said they were “unsurprised” at the negative reaction of Mr Wagenbuur and the other delegates to the city. “The UN recommends that at least 20 per cent of all transport expenditure be used for investment in active travel (walking and cycling), but what we have seen thus far is a few splashes of paint that current studies show can actually put active road users in more danger”.

MEP for Dublin Ciarán Cuffe said the conference showed that “people from other countries believe that Dublin can do more” for cycling. He said that “Dublin has a long way to go to become a cycle-friendly city. We need much more support from central government”.

Plans for a cycle track along the Liffey were first made seven years ago, with a route being finalised last April. The proposed plans will not see cars or buses being diverted from the quays, but more than 100 parking spaces and 33 trees will be removed. Initial plans were rejected by a number of politicians who felt the changes would bring too much traffic into Stoneybatter.

Speaking at the summit, cycling policy adviser to the City of Amsterdam, Ria Hilhorst, said if Dublin wants to become a cycling city, authorities will have to “take measures against cars”.

Last month, hospital data was analysed nationally for the first time in relation to cycling injuries. It was found that hospitals treat one cyclist every three days for trauma.

Mr Cuffe believes that recent local and European election successes for the Greens will put pressure on the Government to prioritise cycling.

“The NTA has a good plan but it requires support from Minister for Transport, Shane Ross”, he said. “The Minister has actually reduced funding for cycling in the last number of years”.

When asked about the criticisms in Mr Wagenbuur’s blog, Dublin City Council said it had been has been “working to improve the cycle infrastructure in Dublin” and a number of schemes were either in construction or about to start construction, such as the Royal Canal cycle way and the Clontarf to City Centre segregated cycle route.

“With specific reference to the experience of cycling along the Liffey, DCC has been trying to advance planning of this route since 2013 and has only in 2019 secured agreement from our elected members on a preferred route and to put it out to public consultation,” it added.

“We will shortly be coming out to public consultation with a number of cycle schemes linking into the city centre and we hope delivery of these schemes will start to enhance the experience of cycling in Dublin.

“To change Dublin into more of a cycling city with better infrastructure does require more space to be given to pedestrians and cyclists and less to general traffic and deliveries. To ensure that commercial activities can continue in the city the City Council recently held a day long European cycle logistic conference just prior to Velo-City which showed how alternative modes of delivery can benefit cities and businesses. “

1 With Lincoln looking on, the crowd dropped to their knees as 7pm approached
2 Covid-19: Harris urges people not to think it’s ‘mission accomplished’ ahead of next phase
3 Gardaí move against cyber crime, prostitution gang in Dublin
4 Luke ‘Ming’ Flanagan bares his bottom half to European Parliament
5 Trinity College Dublin to resume with as much face-to-face teaching as possible
Real news has value SUBSCRIBE