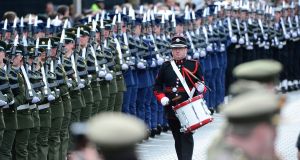 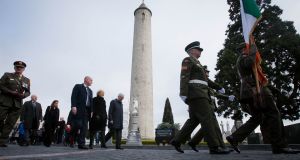 Members of the colour party at the O’Connell Tower in Glasnevin Cemetery during the Easter Sunday Ceremony. Photograph: Collins 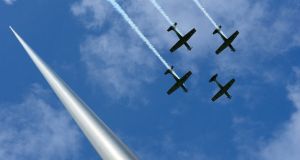 The Air Corps flypast at the commemoration the 101th anniversary of the 1916 Easter Rising outside the GPO. Photograph: Cyril Byrne

The unfamiliar might be forgiven for believing the 101st anniversary commemorations of the 1916 Easter Rising were focused on the building formerly known as Clerys on Dublin’s O’Connell Street.

The GPO had one Tricolour. But Clerys had 10, with dramatic proclamations on its windows announcing “history so real you can almost smell the smoke” and “history so clear, you’re on the frontline”.

But upwards of 230 Defence Forces personnel had their backs to Clerys, facing the GPO, as the rain withdrew and sunshine arrived with relatives of 1916 leaders and the representatives of official Ireland.

Onlookers included the favourites to succeed him – Simon Coveney, wearing a top coat and hands clasped in front holding the event programme, and Leo Varadkar, hands to attention by his sides.

A smattering of applause from the hundreds of bystanders greeted President Michael D Higgins. It continued as he inspected the guard of honour. “Even the sun comes out for him.When you’re good, you’re good,” noted one woman.

In his prayers, Defence Forces chaplain Fr Séamus Madigan reminded all why they were there. “On this Easter day we gather to remember the men, women and children who died during 1916.

“Look kindly on all those who did not come home while our dream of independence became a reality,” he said, “We pray for the healing to memory of the people of Ireland,” he said.

“Help us to let go of any fear which disables and in these times to attend to the wound with gentleness and integrity with courage and compassion and with truth and love,” he went on.

The Proclamation was read by Capt Michael Barry and President Higgins laid a wreath. A solemn minute’s silence followed, uninterrupted.

The Tricolour was raised at full mast followed by the national anthem and, as its very last note sounded, four Air Corps jets passed over the GPO with superb timing, trailing plumes of grey.

Afterwards, all were at ease inside the GPO. Across from all, posing for selfies with a posse of excited fans, was the man who may have attended his last commemoration of the Rising as Taoiseach.

If so, it did not look that way. Instead, he chatted to all and warmly welcomed the woman who could some day be Deputy First Minister of Northern Ireland, Sinn Féin’s Michelle O’Neill.

Speaking earlier, when she delivered the annual oration at Glasnevin Cemetery, O’Neill said Brexit has placed Irish unity back on the political agenda almost a century on from partition.

“The Brexit referendum result has swept away many of the previous political assumptions about the constitutional, political and economic status quo in Ireland,” she said.

“Ireland’s political landscape, North and South, will change dramatically – and this poses a severe threat to the Good Friday Agreement and the political and economic future of the island,” she went on.

Meanwhile, the great-grandson of Peadar Kearney, who composed our national anthem, was among those to gather at Glasnevin, where he sang the standard written by his ancestor.

Meanwhile, chairman of the Glasnevin Trust John Green said a full repair of the memorial wall to all of the people in the Rising which was vandalised earlier this month would be expensive.

Most of the paint splashed on the wall has been removed from the stone, but some has remained adhered to many of the engraved names: “The discolouration is now a green, white and gold hue, which is ironic,” said Green.

“But the problem we have, the stones are very easily replaced and even the engraving is, but the labour intensive part and the expensive part is the gold leaf,” he added.

He said they intend to add the names of Thomas Ashe, who died on hunger strike in 1917, and others, but at the moment they were “just going to pause” before doing any more.