‘We are a burdened community,’ archbishop tells Chrism Mass 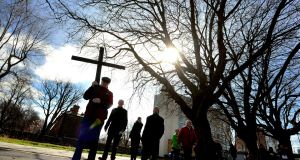 Demographic trends indicate that the future strength of Catholicism on the island of Ireland would depend on clergy and laity of the Dublin archdiocese, Archbishop Diarmuid Martin has said.

Speaking at the Chrism Mass in Dublin’s Pro Cathedral on Thursday he said it meant “we do not have the time to sit back in our old ways, or as cynical bystanders, or to dream of a time that will not return. We have to identify radical new ways of truly working together for mission and freeing priests to carry out their ministry effectively and with human fulfilment.”

Oils for baptisms, confirmations, ordination of priests and the anointing of the sick are consecrated for the year ahead at the Chrism Mass on Holy Thursday every year.

At the Chrism Mass in St Jarlath’s Cathedral in Tuam Archbishop Michael Neary said, “We find ourselves a very burdened community – burdened from within by the weight of our own sinfulness and institutional failure, burdened from outside through sharing the common lot of human kind in a fearful and anxious time.”

He said priests “have a responsibility to help people to lift their gaze beyond the pessimism of those who speak today of ‘new dark ages’ and enable them to discern a distant horizon of hope”.

Speaking in St John’s Cathedral in Limerick Bishop Brendan Leahy said census figures showing that 78 per cent of the population were Catholic was “striking”.

“On the one hand it is good news to hear that in the privacy of their own homes, 78 per cent of our population have affirmed their Catholic identity . . . I doubt even the GAA has such a level of affiliation,” he said.

“We can be grateful too that also in our case, people come to the ‘big matches’ as it were – Christmas, funerals, major events . . . and yet, we also know it does not at all correlate” Mass attendance numbers.

But he warned against “quick solutions ”. There was a need for “time to notice wounds, admit them, bandage them and ensure that those wounds are no longer inflicted ”, he said.

Way of the Cross

Among events taking place on Good Friday will be the Way of the Cross procession from the Wellington monument to the Papal Cross in Dublin’s Phoenix Park, led by Dr Martin, beginning at midday.

Dublin Unitarian Church on St Stephen’s Green will hold its annual service to commemorate all those who have died in the conflict in Northern Ireland at midday.

On Friday evening Dr Martin and the Church of Ireland Archbishop of Dublin Michael Jackson will lead a silent ecumenical procession through the city centre, leaving Church Church Cathedral at 7.15pm for St Mary’s Pro Cathedral on Marlborough Street.

In Galway the Quaker community is hosting an alternative inter-faith event which aims to circumvent serious differences over the interpretation of Easter. Believers of “every faith” are invited to the service at St Nicholas’s parochial school hall from 7pm.