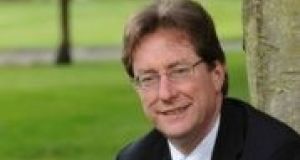 Dr Jim Browne became NUIG’s 12th president in March 2008 and since then the university has seen sustained growth.

NUI Galway has advertised the position of president as current incumbent Dr Jim Browne ends his term of office next year.

The university is being assisted in finding a successor by recruitment specialists Perrett Laver. The post is to be advertised internationally with a closing date for applications of May 11th.

NUI Galway secretary Gearóid Ó Conluain said the university was seeking “a leader with a compelling vision for the future”.

“The successful candidate will epitomise the values and culture of the university, will demonstrate a track record of academic achievement and a thorough understanding of the challenges of higher education, nationally and internationally,” he said.

The next president, Mr Ó Conluain said, “will be a leader who can inspire NUI Galway’s staff and students and take a remarkable university to new heights”.

Ranked among the top 2 per cent of universities in the world, NUI Galway has more than 18,000 students and 90,000 alumni.

Dr Browne became NUIG’s 12th president in March 2008 and since then the university has seen sustained growth.