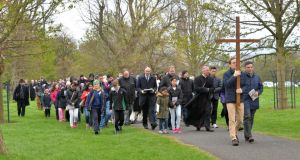 The Way of the Cross procession from the Wellington Monument to the Papal Cross is led by Archbishop Diarmuid Martin on Good Friday. Photograph: Alan Betson

Catholic Archbishop of Dublin Diarmuid Martin has challenged his church for being so judgmental and harsh towards single mothers, gay and lesbian people, and orphans.

He was speaking during the annual Good Friday Way of the Cross procession through Dublin’s Phoenix Park.

“How is it that the church and its institutions could at various times in history, and not only in a distant past , have been so judgmental and treated broken people who were entrusted to its care with such harshness?

“How could we have tried to use the teaching and the merciful way of dealing with sinners to justify or accept harsh exclusion? Think of so many groupings who were misjudged: single mothers who wanted to keep a baby they loved, gay and lesbian people, orphans,” he said.

Dr Martin said Jesus was “demanding in what he expected of his followers” but “he was never a narrow moralist quick to get others to think he was better than them”.

“We can be so judgmental and hurtful towards those whom we decide have failed and those who drift outside our self-made ideas of respectability.”

Christians were “called to be close to those whose lives do not find acceptance because of our narrow judgmentalism,” he said. “We are called to be heralds of life for those whose lives are weakest and unprotected, the unborn, the elderly, those who our modern society consider less worthy of life than others.”

He spoke of “powers of darkness” which were “still active in our times”.

Terrorism “kills innocent people walking along sea fronts, simply going along streets about their everyday business. We are stunned by the horrific images of tiny children undergoing immense and irredeemable suffering as a result of nerve gas attacks.”

He recalled “the image of tiny children washed ashore dead on European beaches lost as their parents attempt to bring them to safety to our shores”.

Referring to recent gangland killings, he said there have been “ brutal and cold murders” on Dublin’s streets “victims of evil attempts to maintain control of that super-lucrative traffic of death which is the drug trade”.

Yet “most of us can be found sleeping because of grief”, he said. People can be anaesthetised by the daily grief of innocent children seen in the media. “We go about our daily business thinking that this is something we can leave to others,” he said. He asked the Lord to “ guide us and guide the leaders in our world to recognise that the power of darkness thrives when we react to anguish by sleeping and hoping that it will go away”.

Dr Martin said people rejected Jesus because of his believers. “Scandals within the church, bitterness and division, empty ritual, a false clerical culture of superiority, judgmentalism of people who Jesus would have welcomed,have all contributed to darkening the possibility of many to recognise the true Jesus.” he said.

“Pope Francis constantly warns of the danger of a church which is just inward-looking, protective of its institution, arrogant rather than merciful.”

At Dublin Unitarian Church on St Stephen’s Green at midday, members of the congregation read out some 3,500 names of those who died in the conflict in Northern Ireland.

On Friday evening, Dr Martin and the Church of Ireland Archbishop of Dublin Michael Jackson led a silent ecumenical procession through the city centre.

1 At least eight shot dead in German town of Hanau
2 A Russian cruiser with ‘cannibal rats’: What other ‘ghost ships’ could be out there?
3 DUP pleads with UK to reduce salary threshold for migrant workers coming to North
4 Person claiming to represent ‘ghost ship’ owner comes forward
5 ‘If all the immigrants go back, who will work in the meat factories and do the crap jobs?’
Real news has value SUBSCRIBE