Our bar on Good Friday: ‘Chrisalmighty Mrs McGarry, just a naggin of Powers’

Growing up in Ballaghaderreen’s Arch Bar a sobering experience 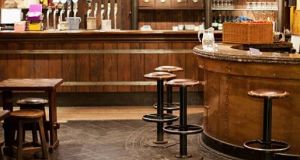 My mother was caught through the pub window by a distressed regular one Good Friday. Always polite, he begged: “Chrisalmighty Mrs McGarry, just a naggin of Powers”. Photograph: Getty Images

It used to seem like we had been plonked in the middle of the Michael Jackson Thriller video. Without the music. In daylight. Under siege. Regulars banging on our doors, throwing pebbles at our windows, pleading outside our walls for just one drink, just one, the one which would solve all their ills for ever more.

And all the time the diminutives getting smaller as their desperation grew, in that west of Ireland way. My father becoming “Tomeen”, my brother becoming “Seaneen”, and my own name a particular challenge but emerging as “Patsheen”.

We had to keep our heads below window level, easier for us kids. “And don’t let them see that fella,” commanded my father one year. “That fella” was Seán. A short time beforehand he told someone in the pub who was looking for my father “...he said to say he wasn’t here”. It was true, but there was murder.

My mother was caught through the window by a distressed regular one Good Friday. Always polite, he begged: “Chrisalmighty Mrs McGarry, just a naggin of Powers,” like the rich man in hell. “Have pity on me and send Lazarus to dip the tip of his finger in water and cool my tongue, because I am in agony in this fire,” he could be saying.

She was stricken. “I told him last night not to come near this house today,” she said. “What can I do? If I give him anything there’s all the others.” And there were. Among them JP, already well into the seven stages of hangover – shock, denial, anger, bargaining, guilt, depression, acceptance.

Asked once where he would end up after death, heaven or hell, he said “I don’t mind. I’ve friends in both places.” But there was no doubt where he spent most Good Fridays.

When any of us in the family had to leave the house on Good Friday it was planned like a military campaign, with lookouts at upstairs windows directing operations and instructing “right. All clear now” or otherwise, before anyone went out.

But there were compensations. The quietest part of the house on Good Friday was the pub itself. One Good Friday, as a small boy, I went in there and climbed to the top shelf where the liqueurs were. I took a swig out of a bottle of Drambuie, that amber honey-based drink which I craved then.

However, it had a potentially disastrous side effect. It made me sneeze. And as I rushed down those shelves, sneezing, my mother came rushing in. “What are you doing?” she shouted at me. “Nothing,” I said. I did a lot of “nothing” in those days. “Get into the kitchen now before anyone outside hears you,” she said.

And I did, glad of the narrow escape.

“Close to midday and something’s lurking out the back,/Under the sunlight you see a sight that almost stops your heart/You try to scream, but terror takes the sound before you make it/ You start to freeze as a regular looks you between the eyes/You’re paralysed....”

That was Good Friday at the Arch Bar on the Square, Ballaghaderreen, Co Roscommon, in my disrupted childhood. Should I sue?