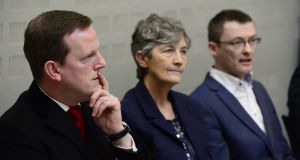 The chief executive of Caranua has withdrawn “unreservedly” comments in which she described survivors of institutional abuse as “these people” who were “damaged” and some of whom would “never be happy”.

Mary Higgins faced robust questioning at the Dáil Public Accounts Committee on Thursday about survivors’ experience of Caranua and her comments about survivors in this newspaper and on radio last month.

Caranua is an independent statutory body, established under legislation in 2012, to manage €110 million pledged by religious congregations to enhance abuse survivors’ lives. Survivors can apply for grants for services under headings such as health and wellbeing, housing support, and education, learning and development.

Survivors however described last month being “re-traumatised” by their dealings with Caranua. They complained of long delays in getting a response from the organisation, being told without warning they could no longer apply for services, and being spoken to without respect.

While guidelines published in May 2014 said there was no limit on what survivors could apply for, in July 2016 a cap of €15,000 per applicant was introduced.

In an interview with The Irish Times on March 20th, Ms Higgins made a series of comments, including: “It suits a narrative of the ‘big, bad State’ and the ‘big, bad religious congregations’ . . . If people feel [disrespected], it’s not because we are nasty or horrible. You can’t control people’s experience of what we do for them . . . We have to face the fact, the damage that has been done to these people is so deep that it doesn’t matter what anybody does. It’s never going to be enough to satisfy them and make them feel cared for, loved, honoured or whatever else.”

In an answer to Independent TD Catherine Connolly at the PAC, Ms Higgins said she regretted the way in which her comments were presented.

“I understand that it may have caused offence and if it did I am very sorry. What I said was not quoted exactly.”

The Irish Times however has a full recording of the interview with Ms Higgins and she was quoted accurately.

Asking Ms Higgins about comments she had made on RTÉ’s Liveline programme, also on March 20th, Ms Connolly said: “I really don’t want to insult survivors by repeating [\IT], because it’s terrible. But this language was used. ‘These people are damaged. The hole in them cannot be filled by what we do unfortunately’.”

“Did you use that language? Did you say that?” asked Ms Connolly.

“I don’t know definitely that I said that,” said Ms Higgins. “But I do think it’s the reality that the damage that was done to people who were placed in institutions when they were children is profound and it is life-long and part of the damage causes people to not expect other people to want to do something good . . . If you think we are the face of the State, the State that did this to people, it is understandable that people would be angry with us.”

“Are you withdrawing those comments?” asked Ms Connolly.

Ms Connolly asked about Caranua writing to applicants to tell them it had their case complete and their file closed. Ms Higgins said cases had to be completed because it was not possible to keep all applicants’ files open indefinitely. She said all applicants should be advised they have a right to appeal the decision and how to do so, and this was not included in such letters.

In a report to the committee, the Comptroller and Auditor General said he had identified weaknesses in the Caranua board’s control over grant payments in 2014 and 2015.