Irish Church of Scientology is back in profit after 2015 loss 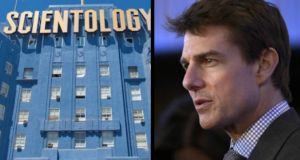 Hollywood star Tom Cruise is among the high-profile names associated with the Church of Scientology. Photograph: Brenda Fitzsimons

The Irish Church of Scientology last year returned to profit as its directors state that they intend to increase current trading levels.

New accounts show that the Church of Scientology Mission of Dublin Ltd recorded a profit of €48,803 and this followed the Church firm recording a modest loss of €19 in 2015.

The global church counts film stars Tom Cruise and John Travolta among its best known members and the Irish church was previously bailed out to the tune of €326,875 when a loan provided to the Church of Scientology here was forgiven by Churches of Scientology overseas.

The church’s accumulated loss from over the years at the end of April last stood at €152,716 and the its long-standing deficit is understood to relate a long-running High Court action from 2003. This case was taken against the church by former member Mary Johnston, but was settled out of court on undisclosed terms after 31 days of evidence.

The revenues were made up of Scientology and Dianetics Services.

A note attached to the accounts states that there is no significant uncertainty as to whether the company will be able to discharge its current liabilities as they fall due in the future and that it was appropriate to adopt the going concern basis of accounting.

Auditors for the Church, Kilcoyne and Co Accountants, state that “you consider that the Church of Scientology Mission of Dublin Ltd is exempt from the statutory audit requirement for the year”.

They say that they have not been instructed to carry out an audit or a review of the financial statements of Church of Scientology Mission of Dublin Ltd.

The auditors state: “For this reason, we have not verified the accuracy or completeness of the accounting records and explanations you have given us and we do not, therefore express any opinion on the statutory financial statements.”

In the church firm’s 2015 accounts, the same auditors had stated that was a material uncertainty related to events or conditions that may cast significant doubt on the entity’s ability to continue as a going concern and therefore, that it may be unable to realise its assets and discharge its liabilities in the normal course of business.

The auditors noted that at the end of April 2015, the company’s current liabilities exceeded its total assets.

At the end of April 2016, the company’s balance sheet had improved but the church firm had a shareholders’ deficit of €124,285.

The directors of the company are listed as the non-executive director of the Church of Scientology Mission of Dublin, Gerard Ryan and Siobhain Ryan.

The Irish branch is part of a global movement established by deceased US author L Ron Hubbard. And the Church of Scientology states that its purpose is to transform individual lives and the world, proposing that everyone is a Thetan an immortal spiritual being that lives through countless lifetimes.

Scientologists believes that Hubbard discovered the fundamental truths of existence and they revere him as ‘the source’ of the religion.