Domestic abuse: ‘I don’t think people realise the full horror of it’

Jessica Bowes was hospitalised following violent attack by partner in 2015 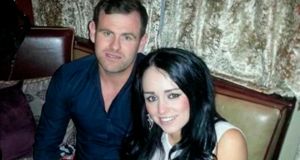 Jessica Bowes was lying on a hospital bed in labour when her partner Jonathan McSherry instructed that she keep quiet during the birth of their child. The yells of a woman in a nearby ward echoed down the corridor as McSherry turned to his girlfriend and ordered her “not to make a show of me”.

“He said ‘Jesus, you better not scream’ and my heart just sank to the pit of my stomach. What had I done to deserve this? I didn’t want him to see any weakness so I didn’t make a sound. I remember the nurses saying afterwards that I’d sailed through it but I hadn’t. I just didn’t want him to know the pain. He would have left me there and mocked me.”

Domestic abuse is not just about the physical violence, says Ms Bowes. It’s the mental scars that stay with you forever. However, it was the combination of physical and psychological damage in her relationship with McSherry which finally pushed Ms Bowes to apply for a barring order in 2014. He was already physically abusing her, including punching her in the face in front of their children, and had shown up at her workplace in a rage of jealousy after he discovered a text from a male friend on her phone wishing her a happy birthday.

“He had smacked me and used to bite and scratch me and always tried to mark my face. I felt so low all the time. I couldn’t understand why I was being treated in that way. I made good money and had a job, nothing seemed to be good enough for him. I was living in crisis and always had a burning feeling, waiting for things to kick off.”

After she secured the barring order, McSherry continued to contact and visit Ms Bowes, pleading that she allow him back into her life. “He was bombarding me with text messages and kept saying I want to come home and be with you and the kids.” In December 2015, she returned from a Christmas party only to discover McSherry was waiting in the garage beside her home. She says her former partner threw himself on the taxi she had travelled home in and began beating the driver, who was a friend, and another male passenger.

The two men ran off and McSherry turned on Ms Bowes and her female friend who had also been in the car. “He went straight for me and punched me right in the face. It was full force, like a punch between two men in a boxing ring, and my legs just lifted out from under me and I fell, hit my head off the path and lost consciousness. McSherry then began beating Ms Bowes’ friend. When she tried to intervene he began attacking his former partner again.

“My lip and eyebrow were burst, my dress was covered in blood. He lifted me up by my hair and walked me down the street, punched me in the face and then gave me three full force kicks. It was so scary, I don’t think people realise the full horror of it.”

Jessica Bowes eventually found cover in a neighbours’ home and called the gardaí. She ended up in hospital with multiple facial fractures, a gash to her skull, a shattered cheekbone, permanent scarring, nerve damage and memory loss. She returned home for her daughter’s birthday which was the day following the attack but had to be readmitted to hospital for reconstructive surgery on her face on Christmas Eve. A social worker at the hospital suggested Ms Bowes contact Women’s Aid for support following the attack.

“I’d heard of Women’s Aid before but I had the idea that it was only a helpline and listening ear. But there was so much more... safety planning, court support, shelter... the lengths they go to on your behalf are incredible.”

Ms Bowes worries that Irish society does not always take women seriously when they report abuse. “These are people genuinely living in crisis. These women are not afraid for no reason. There are genuine, serious threats to most of them.”