Kilkenny, Leitrim and Monaghan have the State’s lowest application rates 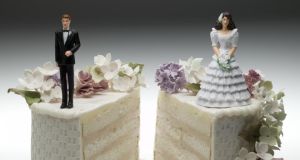 Co Carlow has the highest divorce rate in the State, followed by Dublin, Tipperary, Clare and Louth, according to the latest figures from the Courts Service.

More than 4,100 couples around Ireland applied to divorce in 2016; a further 1,300 or so applied to separate. Dublin had the most divorce applications, at 1,411; Leitrim, the Republic’s least populated county, had the fewest, at 17. It also recorded one of the State’s lowest rates of divorce, joining Cos Kilkenny and Monaghan in having just 60 per cent of the national average of 87.4 applications per 100,000 people. Only nine of the 26 counties had rates higher than the national average.

There were also 32 applications for nullity, with 14 granted; reasons for a court to declare a marriage null and void include a lack of mental capacity, a lack of consent, and one spouse’s being “incapable of sexual intercourse”. The highest numbers were in Dublin, Cork and Galway.

The State also saw its final 61 civil partnerships in 2016.

Ireland’s divorce rate remains very low by international standards; only a handful of countries had lower rates in the most recent UN rankings.

The waiting time for a divorce could change soon. Couples currently need to have been separated for four years before they can apply for a divorce. A referendum planned for 2019 could cut that to just two years.