Over 2,000 people from countries now recognised as areas of concern turned away 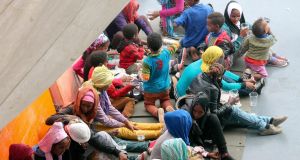 Ireland has the second-lowest rate of granting asylum (13 per cent) across the EU and compared poorly to the EU average of 44 per cent between 2008 and 2016. Photograph: Irish Defence Forces via AP

More than 28,000 non-EU citizens were refused entry to Ireland between 2008 and 2016, including over 2,000 people from countries now recognised by the Government as conflict zones or areas of humanitarian concern.

An analysis of the European Commission database, Eurostat, has established that 70 per cent of those non-EU citizens refused entry at Irish air, sea and land borders were turned away because of false or invalid visas or permits.

The database shows 2,135 citizens from Afghanistan, Iran, Iraq, Syria, Eritrea, Libya and Somalia were refused entry during this period although their purpose of travel is not clear. These countries are being prioritised by the Government for asylum consideration since December 2016 following a recommendation by the United Nations High Commissioner for Refugees.

The number of non-EU citizens refused entry or refused leave to land doubled between 2013 (1,935) and 2016 (3,950). More Brazilian citizens (3,515) were refused entry than any other nationality during the nine-year period analysed.

The findings form part of a special investigation by Belfast-based website The Detail, supported by the Mary Raftery Journalism Fund and the Tony Ryan Trust.

The Eurostat database draws on data provided by each EU member state. Data for 2017 is not yet available.

The Department of Justice did not provide specific figures on how many non-EU citizens passed through immigration services but confirmed that the number of people refused entry in 2016 represented 0.025 per cent of all non-EU visitors.

Non-EU citizens cannot appeal a decision to refuse entry but can seek further clarification and in some cases may legally challenge the decision. In certain circumstances an individual refused entry may opt to seek asylum if they fear returning to their home country.

Ireland has the second-lowest rate of granting asylum (13 per cent) across the EU and compared poorly to the EU average of 44 per cent over this period. The Department of Justice refused to provide 2017 data under Freedom of Information legislation citing that data would be available on Eurostat later this year.

The Department of Justice said the profile of asylum seekers coming to Ireland differed from that across the EU and that figures for 2017 suggest its rate of granting asylum was “in line with European norms”.

A spokesperson for the department said: “The statistics for 2017 will show a significant change. As a result of the arrival of a significant number of Syrian applicants for international protection, the percentage of applications awarded during the last year was approximately 50 per cent – a figure likely to be in excess of the EU average.”

Many Syrian refugees have been relocated or resettled from Europe under a humanitarian scheme established by the Irish Government in response to the 2015 migrant crisis rather than coming through the mainstream asylum process. Under the Irish Refugee Protection Programme the government pledged to accommodate 4,000 refugees fleeing Syria and other war-torn countries.

Fiona Finn, chief executive of immigrant support centre NASC, said the trends were concerning: “To see an increase in the numbers of people being refused entry, in particular people emanating from conflict zones, is particularly worrying.”

Catherine Cosgrave, legal services manager at the Immigrant Council of Ireland, said there was a lack of published guidance around how decisions were made by immigration officials.

“Some of the grounds for refusal of leave to land are highly subjective.”