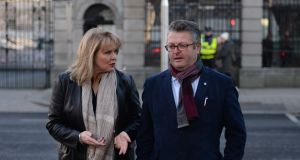 Recent cases of child abuse and exploitation over the internet are just “the tip of the iceberg” and the State faces “a tsunami” of cases coming down the line, a leading expert has said.

Dr Mary Aiken, an adviser to the European Cyber Crime Centre at Europol, addressed the Oireachtas Joint Committee on Children and Youth Affairs on Tuesday alongside Prof Barry O’Sullivan, who is director of the Insight Centre for Data Analytics at UCC.

Asked by legislators whether the outlook was “hopeful or dystopian”, Dr Aiken said: “This is the tip of the iceberg in terms of what’s coming. I can say that unequivocally. We are facing a tsunami of these cases coming down the line.”

Dr Aiken later added that the threats facing children from smart devices will be exacerbated in the coming years by the proliferation of virtual reality technology.

The committee meeting comes weeks after Dublin man Matthew Horan was sentenced to nine and a half years in prison for blackmailing young girls into sending him sexually graphic photos and videos.

Dr Aiken said individuals seeking to target children also have the capacity to physically locate them through geotagging, which is a process whereby geographical information is added to media on a device. For example, this occurs when a photograph is taken.

“We are haemorrhaging data through these platforms,” said Dr Aiken. “Predators are profilers too. They can get the coordinates, pop the house up on a map on Google Street View, and tell the child: ‘I’m watching you. You’ve got a green door. I’m just a few doors down.’

“They know the time of day when an intimate photo has been taken and can surmise they are unsupervised at that time. They could then call to the house to try to engage with them.”

Another danger highlighted was how tech companies dictate the prominence of certain posts on social media, which in turn influences the behaviour of children online and how their personality develops.

“It’s really pernicious,” said Prof O’Sullivan. “We are crowd-sourcing self esteem. A particular post that doesn’t receive as many ‘likes’ may have been sidelined because of a multinational’s algorithm that has concluded it is unlikely to generate engagement.”

In terms of how best to deal with these challenges, both experts said a ban on smart phones for children was “too extreme” and would simply not work. Instead, guidelines for parents surrounding usage and screen time would be more favourable.

Another proposal was the introduction of devices for specific ages, which may in some cases involve the absence of geotagging technology.

Another matter for discussion was the digital age of consent, which is the age from which it is legal for data controllers to gather data from minors. Effectively, that is the age at which children can use many websites and social media platforms.

The Data Protection Bill 2018, which enshrines an Irish digital age of consent at 13 years old, has been submitted to the Seanad and is currently under consideration. Both experts said they were “unequivocally opposed” to the proposal.

“You can’t buy a dog licence at 13, but we could have a situation in May where kids can sign up to a system and give a social media company access to their information, including the likes of family photos,” said Prof O’Sullivan.

“Companies can collect, record and share a child’s home and school address, their location, their date of birth, their photos, phone number, their likes and dislikes, who they know, and the content of their conversations, including messages sent privately.

“Not only does this present a security risk to the individual child but, by association, it also presents risk to the family.” Both experts said an optimum digital age of consent would be 16-years-old, and that “robust age verification” online was “critical”.