Four siblings aggrieved over handling of complaints about NUI Galway 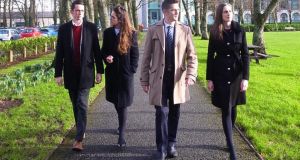 The four siblings from Castlebar, Co Mayo, were unsuccessful in complaints heard by the Workplace Relations Commission

Four siblings who claim their freedom of speech and religious expression was curbed at NUI Galway (NUIG) have urged the Joint Oireachtas Committee on Justice and Equality to investigate their case.

The siblings claim that the Galway university’s authorities had “ignored or dismissed” their concerns about “bullying, harassment and intimidation”.

Meanwhile, they maintain there were shortcomings in the WRC investigation, and that the adjudication officer was not eligible to handle their complaints.

Dismissing this, the WRC said it “affirms that all adjudication officers in its service have extensive experience in employment law, equality law, industrial relations and trade disputes and have also received training from the WRC in handling disputes/complaints”.

The four siblings had been active members of two college groups, the Christian Union and Life societies, which promoted “teachings of Christianity” and “sanctity of human life”.

They have claimed that society posters, including posters opposing abortion and opposed to same-sex marriage, were “ripped down” and they were harassed and intimidated. They said they submitted “numerous complaints” to the college authorities, dating back to March 2013.

The siblings say they were told on November 10th, 2014 that they were “disbarred” from membership of all college societies on grounds that they had improperly used €325 from the Christian Union society account to print flyers.

Postgraduate student Isaac Burke, who is a Hardiman scholar undertaking a PhD in mathematics at NUIG, says that the flyers related to the Christian Union society’s opposition to a campaign to boycott Israeli goods, which was voted through by NUIG students.

He says that there was no misappropriation of funds, and has questioned why the college has not investigated other societies in relation to receipted expenses.

The four students initiated Equality Tribunal proceedings against NUIG in late 2014, claiming that it had discriminated against them on the ground of their religion contrary to the Equal Status Acts. The case was referred to the WRC, and an investigation opened in late October 2016, with six hearings in total.

However, the students say that they were not happy with certain aspects of the investigation and wrote to the WRC and to the then Tánaiste and Minister for Jobs, Enterprise and Innovation, Frances Fitzgerald TD, in June 2017, claiming that there were significant procedural and legal shortcomings, and that the adjudication officer was not “legally eligible” to investigate their complaints.

In November 2017, the WRC issued its ruling in which it found that 18 of 27 complaints submitted did not occur within statutory time limits. Other complaints were dismissed as the adjudicating officer found that a prima facie case of discrimination, harassment and/or victimisation on grounds of religion under the Equal Status Acts had not been established.

Mr Burke said that he and his siblings still felt very aggrieved over the NUIG handling of their situation, including the 2014 ban, and were concerned about the manner in which the WRC subsequently handled their complaints.

He and his siblings have asked the Joint Oireachtas Committee on Justice and Equality to investigate their issues. A committee spokesman confirmed a submission had been received this week.

Two of the four siblings are still attending NUIG, undertaking postgraduate studies, while two have graduated and are in Dublin.

NUIG said the matter had been adjudicated on by the WRC and a decision had been made in its favour, disposing of all claims of discrimination. The WRC said it does not comment on individual cases.