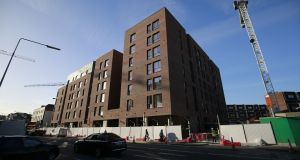 Minister for Housing Eoghan Murphy says he will “study the full text” of a decision by the European statistics agency, Eurostat, to reclassify voluntary housing associations as statutory bodies.

He pledged the decision, confirmed at the Oireachtas housing committee on Thursday, would not impede the delivery of social housing.

Voluntary housing bodies, including Respond, Clúid and Circle Housing, however, say the reclassification is the “most significant issue” to hit the sector in many years and warn of a “reduction of social housing output”.

Paul Morrin, a senior statistician in the Central Statistics Office, told the committee Eurostat had “indicated” it would announce in the “next couple of weeks” that 14 of the largest approved housing bodies (AHBs) here should be “reclassified in their entirety on to the State balance sheet”.

This means the estimated €250 million spent by AHBs will be considered part of the State’s public expenditure and, from next year, will impact on the fiscal space available to Government for public spending.

AHBs, which are expected by the Government to deliver about one-third of all new social homes up to 2020, say designation of their borrowings and expenditure as “public” will hamper their capacity to deliver housing.

Eurostat’s decision follows a recommendation by the CSO in December that, as the Government provides most of AHBs’ funding and sets most of their conditions – including the rents they charge and the tenants they house – the largest AHBs should be considered public rather than private bodies.

“Being non-market in nature, this requires the AHBs to be classified in the government sector. The decision is with Eurostat who are the final arbiters on such matters, and they have recently indicated agreement with CSO on this,” said Mr Morrin.

Donal McManus, chief executive of the Irish Council for Social Housing, said reclassification would cause “concern within the sector in a range of areas, such as with the commitment to support existing AHB projects, meeting Government social housing targets and the impact for reclassified bodies on borrowing”.

The sector is calling for a working group, comprising AHBs and the Departments of Housing and of Finance, to find ways to have the reclassification reversed.

John McCarthy, senior economist at the Department of Finance, said he did not expect reclassification to impact significantly on the fiscal space available to Government for public spending. The committee heard AHBs’ public expenditure was about €250 million a year.

Mr McCarthy said €250 million would be absorbed into this year’s expenditure as there was scope within the Eurostat rules for expenditure growth of 2.4 per cent.

“So there’s no problem this year [for the fiscal space] and probably not for next year as well, as long as the level of spending stays at €250 million . . . It would be the increase that impacts on fiscal space.”

He said €250 million was “about 0.1 per cent of GDP” and this would “put us slightly off the MTO [medium-term objective]” of balancing the national budget by 2018. “So that alone would not jeopardise the achievement of a balanced budget this year. I wouldn’t say I’m relaxed about it but it’s not something that would keep me awake at night – having an MTO that’s 0.1 per cent off.”

If the AHBs spent a “significant amount” more on housing next year of about €140 million over €250 million, this could cause problems for the fiscal space, he said.

He said EU rules did not prevent the Government spending more on housing, only that any increased spending must be financed through increased taxation or reduced spending elsewhere.

“The fiscal rules are about ensuring fiscal sustainability and if the Government wants to spend more in any particular area all the rules say is, ‘That’s absolutely fine but you’ve got to find the revenue to pay for it.’”