Future of Time4Us, which provides play and cooking facilities, in doubt due to regulatory requirements 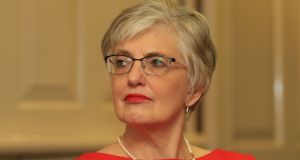 Minister for Children Katherine Zappone: A spokeswoman said the Minister had committed to meet the Time4Us board and local TDs to “re-examine the situation in Galway”. Photograph: Nick Bradshaw

A pioneering service to allow children spend time with parents who do not live with them, and the only one of its kind in the State, faces closure at the end of March due to increased regulatory requirements and a dearth of people to sit on its board.

Time4Us, a play and recreation centre in Galway city where children can spend time with a non-resident parent – usually their father – as been operating since 2007.

Founded at the instigation of then minister of state for children and local TD Frank Fahey, Time4Us operates in a house owned by the Child and Family Agency, Tusla, in the Shantalla area.

It provides play and cooking facilities, meaning separated parents who may not be able to bring their children to their home, or may be unable to afford activities outside their home, can spend time with their children, do homework and prepare food.

The service is open Tuesday to Sunday, with weekends the busiest time. Families may self-refer or may be referred by the courts or social services.

They come from across the social spectrum, with some parents travelling weekly from Cork, Mayo and outside the jurisdiction to see their children. Some 45 families use it every week, and about 500 a year. It costs €84,000 a year to operate.

When founded there were upwards of 10 members on the board, including representation from the HSE’s children and family services (prior to the establishment of Tusla) and the Department of Social Protection, explains Fionnuala Foley, one of the service’s four serving board members.

These government members had to withdraw following enactment of the 2009 Charities Act, as their employers part-funded the service.

“Other members retired for personal or other reasons,” she said. “We are now down to five members, with four actively involved. With increased demands like the Children First legislation, data protection requirements, it’s just not sustainable for us to continue on the current voluntary basis. Closing is the last thing we want.”

Concerns about the imminent closure have galvanised a campaign, spearheaded by parents who use the centre and supported by family law solicitors, barristers, child psychologists, social workers and local TDs in the Galway area.

Some 40 professionals, led by barrister John McCormack, have written to Minister for Children Katherine Zappone, appealing to her to “meet with the board and indeed ourselves so that together we can guarantee the survival of this much valued service”.

A spokeswoman said Tusla had “worked proactively with Time4Us to assist them in developing a plan to close the service, while causing as little disruption as possible to those who use the service”.

A spokeswoman said Ms Zappone had “committed” to meet the Time4Us board and local TDs to “re-examine the situation in Galway. Arrangements are currently being made to facilitate this meeting.”

One father of two young children told The Irish Times he would not see his children at all if Time4Us were to close.

“I’d say it’s an absolutely essential service. It puts the children first and at the end of the day this is about children having the right to have a relationship with both their parents,” he said.

“Government should open places like this all over the country, not close the only one there is.”