Asylum seekers’ right to work: how can they apply for jobs?

Asylum seekers must find job with starting salary of at least €30,000 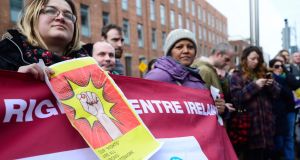 A demonstartion for the unrestricted right to work for asylum seekers outside the Dail. Photograph: Cyril Byrne

On Friday morning the Supreme Court formally ruled the ban on asylum seekers’ right to work as unconstitutional. This means that as of February 9th, women and men awaiting a decision on their asylum application were legally entitled to apply for jobs in Ireland.

However, the Government’s decision to opt into the EU (recast) Reception Conditions Directive, a scheme which is largely directed towards highly skilled workers, means the majority of asylum seekers will find it very difficult to secure employment.

The new scheme will allow asylum seekers - both those living in the State’s direct provision centres and those outside them - to apply for an employment permit from the Department of Business, Enterprise and Innovation under the Employment Permits Act 2003. But the scheme also requires that they pay between €500 to €1,000 for a six- to 12-month employment permit. Asylum seekers living in direct provision currently have a weekly allowance of €21.60 and can buy food using a recently introduced points system.

Applicants must find a job that pays a starting salary of at least €30,000 per annum, while their prospective employer must show they were unable to find a suitable Irish or EU citizen to fill the position. Asylum seekers will also be unable to apply for a job in more than 60 different areas including positions in hospitality, healthcare, social work, childcare, general care services, marketing, sales, administration, textiles, printing, housekeeping, food and construction.

The Department of Justice has described the scheme as a “temporary measure” which will remain in force over the next four months until the EU directive is fully implemented and a work-permit scheme is drawn up for asylum seekers. The department says there will be “increased access” to jobs under the final scheme with employment options offered on “more generous terms”. Minister for Justice Charlie Flanagan has also said the permit application fee will be waived once the State has fully opted into the EU Reception Directive.

Mr Flanagan has also introduced a discretionary administrative scheme which will consider applications for self-employment. This will be provided for a renewable six-month period and is subject to a number of conditions, including that the applicant has been waiting for a first instance decision on their asylum application for nine months or more.

The Irish Human Rights and Equality Commission (IHREC) welcomed Friday’s Supreme Court declaration but underlined that it would seek engagement with both the Government and the Oireachtas to emphasise that “new measures need to be inclusive and universal and do not create conditions likely to give rise to exploitation”.

Chief Commissioner of the IHREC Emily Logan said that it was clear the threat to human dignity posted by being deprived access to employment was “not abstract or theoretical” and that the right to work was “essential for realising other human rights”.