Thinking Anew – ‘What are they doing?’ 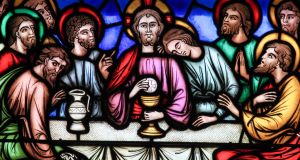 It happened at an early Sunday morning Eucharist as people knelt to receive the sacrament. Among them was a young man with his five-year-old son who, as the people received Communion, asked out loud, “What are they doing, Daddy?” At one level the answer is simple and straightforward – receiving Communion; at a deeper and perhaps more personal level the answer would vary from person to person and situation to situation.

What are they doing? The Russian author Alexander Solzhenitsyn tells of a Eucharist he attended while a prisoner in the Gulag. In that place of utter hopelessness, a long-imprisoned Orthodox priest celebrated Holy Communion from memory without vestments or service books as if in the grandest of churches. When the priest turned and declared: “The body of Christ. The blood of Christ”, Solzhenitsyn said he watched the tears of joy on the faces of the prisoners who held out grimy hands to receive what only the eyes of faith could see, and sip from an unseen chalice what only the soul could taste for there was no bread or wine to be the body and blood of Jesus that day, and yet the miracle did occur.

What Solzhenitsyn experienced in that Eucharist would bring him to faith and change the course of his life.

What are they doing? Children’s questions are often much deeper than they seem.

Tomorrow’s Gospel reading gives an account of the Transfiguration of Jesus. It is a time of confusion, chaos even, among the disciples who are struggling to make sense of who Jesus is and what he is about. Even Peter whilst acknowledging Jesus to be the Messiah rejects any suggestion that he could possibly suffer and die. What would be the point of that? It just didn’t make sense to those early followers, but Jesus insists that his passion and death are inevitable.

The disciples had to learn that Jesus was no mere transient preacher passing through; the Transfiguration demonstrates that the mission of Jesus had universal and lasting significance because it was part of God’s engagement with the world. It informs our understanding of the Eucharist where “we remember his passion and death, we celebrate his resurrection and ascension and we look for the coming of his kingdom.” God’s promise holds even in the darkest of moments.

Archbishop Oscar Romero was aware of this as he ministered to the people of El Salvador living through the hell of civil war and state-sponsored terrorism. In a sermon preached three weeks before his assassination by government forces, he explained how that long-ago event on the mount of the Transfiguration mattered for suffering people everywhere: “The theology of Transfiguration is saying that the road of redemption passes through the cross and to Calvary, but that the goal of Christians is beyond history. Not to alienate oneself from history, but rather to give more meaning to history, a definite meaning.”

Rather than give in to despair, the promise of the transfigured Christ encouraged Romero to make the connection between faith and life; to enter fully into the world of real events and to more publicly and passionately support and reassure his people in desperate times. The Transfiguration allows us to make that same connection especially in those dark times in our lives when we suffer or grieve.

So, what are they doing? The prisoners in the Gulag knew exactly what they were doing. They had been stripped of everything that could be taken from them – their names replaced by numbers; they were subjected to mental and physical abuse and every possible indignity. But their faith could not be taken from them and Solzhenitsyn saw tears of joy on their faces as they “held out grimy hands to receive what only the eyes of faith could see”. Horatius Bonar gets the sense of that in his eucharistic hymn: “Here O my Lord, I see thee face to face;/ here faith can touch and handle things unseen;/ here would I grasp with firmer hand thy grace;/ and all my weariness upon thee lean.”