#TooIntoYou campaign seeks to highlight ‘darker side of relationships’ 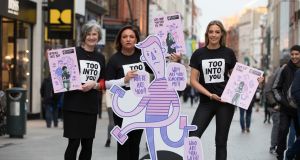 For most people, Valentine’s day is a time for love, romance and affection. However, for the one in five women experiencing abuse in their relationship it serves as a harsh reminder of the insidious and harmful ways their partner is controlling their lives.

The Women’s Aid #TooIntoYou poster and social media campaign, which launches on Wednesday and runs for three weeks until International Women’s day, seeks to raise awareness among women aged 18-25 around “the darker side of relationships”.

Director of Women’s Aid Margaret Martin says young women are at higher risk of abuse than older women and that 60 per cent of abuse in relationships in Ireland begins before the age of 25. She adds that one in every two women aged between 16 and 25 who were killed in Ireland since 1996 were murdered by their boyfriends or exes.

“In contrast to typically ‘softer’ Valentine’s messages our hope is that in calling attention to the darker side of relationships at this time that the campaign will have a high impact,” said Ms Martin. “We are clearly asking - what part of love is abuse?”

The #TooIntoYou campaign comes as the Domestic Violence Bill awaits a Committee stage hearing after passing all stages in the Seanad and the Second Stage in the Dáil.

The Bill, which is due to be enacted early this year, will enable Ireland to ratify the Council of Europe convention on preventing and combating violence against women, also known as the Istanbul Convention. Psychological abuse, controlling behaviour and “coercive control” within a relationship will also become a crime punishable by up to five years under the new Bill.

Ms Martin says the Bill will bring “real and significant change” for victims of domestic and dating abuse and will finally allow young women who do not live with their partner to avail of safety orders. She also welcomed the recently introduced Labour Party Bill which addresses the harmful use of technology in intimate relationships.

Businesswoman Norah Casey, who is supporting the campaign and experienced domestic violence over a nine-year period in her first marriage, said she wished someone had warned her when she was in her early 20s of the “tell-tale signs that I was being seduced into a toxic relationship”.

“Every woman should know the signs. Prevention is far better than the consequences, tragically sometimes fatal, for women who are trapped in abusive and violent relationships.”

Ms Martin urged young women in both physically and psychologically abusive relationships to contact Women’s Aid or speak to someone in confidence. “Your boyfriend does not have the right to control and abuse you. You should not have to worry about how he will react to what you do. You may feel like you are ‘walking on eggshells’ and living in fear of his moods and temper. Dating abuse is wrong and no one deserves to be threatened, beaten or be in fear for their lives.”

Some 15 per cent of women and six per cent of men in Ireland - 213,000 women and 88,000 men - have experienced abusive behaviour from a partner at some point, according to Cosc, the National Office for the Prevention of Domestic Sexual and Gender-based Violence, while two out of five people know someone who has experienced domestic violence.