Father of three living in Athenry, Co Galway, was due to be deported on Tuesday 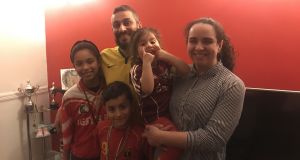 The partner of a Brazilian man due to be deported from the country on Tuesday has described a revocation of his deportation as the “best day” of her life.

Lucivaldo Araujo da Silva (35), the father of an undocumented family of five living in Athenry, Co Galway, had been arrested in early February and held in Cloverhill Prison ahead of his planned deportation.

Speaking after his release on Monday, his partner, Danielle Martins Ribeiro, said the family were “so happy” with the news. “It is the best day of my life,” she said.

In a statement, a spokesman said Minister for Justice Charlie Flanagan “became aware of this case in recent days and followed up promptly with his officials”.

“There is no imminent threat of deportation in this case. The Minister will have further opportunity to review the case and any new information the applicant wishes to submit,” the spokesman said.

Speaking to The Irish Times on her 12th birthday on Sunday, Stephany appealed for Mr Flanagan to intervene to halt her father’s deportation.

Both Stephany and her mother had also been told they were subject to deportation orders.

“I’m from Athenry, they told me I have a deportation order, I’m very confused . . . I have never stepped my foot out of here, I’ve spent my whole life here. I was born in Galway hospital. I’m a Galway girl from the fields of Athenry. I don’t want to go to Brazil, ” Stephany said.

In 2004 a referendum to remove the automatic right to citizenship of children born in the country to non-Irish parents was passed by a large majority.

Mr Araujo da Silva said the weeks since his arrest had been “very painful.” He was 22-years-old when he came to Ireland and has lived here for 13 years. He met Danielle a year after he came to Ireland in a pub in Athenry, and the pair have raised their family in the town.

The family’s three children “only know Ireland” as their home, and “everything I do I do for them, their life here, their education,” he told The Irish Times. “I feel here is my home, I like Ireland, I like the cold weather,” he said.

Ms Martins Ribeiro said she hoped the deportation orders hanging over the family would be fully revoked by Mr Flanagan. “I hope for his compassion for my family,” she said.

When she phoned Stephany with the news about her father on Monday “she was so happy she screamed,” Ms Martins Ribeiro said.

Fianna Fáil TD for Galway East Anne Rabbitte had made representations on behalf of the family, and barrister Lorraine Lally had provided legal assistance on the case.

On Monday morning Mr Araujo da Silva had been told in Cloverhill Prison to change into his own clothes, which sparked fears he was about to be deported from the country a day early, Ms Lally said. However, he was then released from prison and instructed to sign on at an immigration office once a month.