‘We watch these houses being built, and none of our children on the list are getting them’ 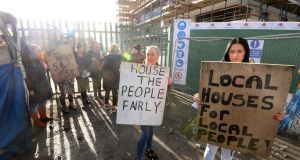 A group of protesters calling itself “House the Irish First” has staged a three-week picket that has halted building work on 65 social homes in west Dublin.

The protesters insist they are not racist but are “angry” about how the housing crisis is affecting families they know.

The group of about 50 people, mainly women, has mounted a 24-hour presence at the entrance to the site at Ladyswell Road, Mulhuddart, since mid-January. Construction work halted a few days after they began their protest and has not resumed.

The site is being developed by the housing association Clúid and will comprise two-, three- and four-bed houses as well as one-, two- and three-bed apartments, 22 of which are described as “age-friendly”.

The women said they see social housing being built but that a disproportionate amount is allocated to “non-national families who are not from the area” – a charge Fingal County Council denies.

The women said their families are spending up to 15 years on the waiting list with many ending up leaving the area to get housing.

Mulhuddart, a largely working-class area, is one of the most ethnically diverse in the State, with almost 40 per cent of the adult population born outside Ireland, compared with a figure of 17 per cent nationally.

In such a context it could appear that a disproportionate number of migrant families are allocated housing compared with other areas, said Píaras Mac Éinrí, a lecturer in University College Cork.

“While international experience has been that hostility to immigrants has increased where there are inadequate public services, including housing, my sense is that there hasn’t been a significant grassroots mobilisation against immigration in Ireland.

“I say that without wanting to be smug.We mustn’t be complacent,” he added.

The protesters want half the social houses built in Ladyswell reserved for Mulhuddart households on Fingal County Council’s housing list, and the other half to be available to the wider council list.

“We watch these houses being built, and none of our children on the list are getting them,” said one woman in her 50s, who did not want to be identified. “They can be 10, 12 years on the list, and they’re going nowhere. There’s no explanation as to why.”

Sheltering under a gazebo at the site entrance, the mothers and grandmothers said they will continue their protest until they reach an agreement with Clúid and the council.

“We have heard there are two lists,” said Nova Gannon (50). She said her 29-year-old daughter is homeless with two children. “We don’t know how it works. What we do know is the list for the girls from around here has not dropped, and non-national families are moving in. We are tired of seeing the girls move out of the area, away from their family supports. Our communities are being broken.”

Celine Corish (27) said she is living with her sons aged nine and five in her mother’s three-bedroom house with 10 other people.

“There’s one bathroom. I share a bedroom with my sister, her two kids and my two kids. There’s damp all over the walls and ceiling. We got the council out and they said the damp is because it’s so over-crowded. I’m 7½ years on the list, number 860.” She said she has been told she will be waiting seven to 10 more years to be housed.

Kiera Emmet (34) has two young daughters. The house she has rented for nine years was sold last year, she said, and she is “living week to week” waiting for a day’s notice to leave.

“I rang the council, and they said if I’m lucky I’ll get a hotel for me and the kids. I’ve chronic depression. The doctor is after upping my tablets. I just can’t cope anymore,” she said, breaking down in tears.

She said she has been on the housing list for five years and is number 265. “I only went down 10 places last year. There’s nothing. You’re just a number. They don’t care,” she said.

Asked why they have named their group “House the Irish First” while insisting the protest “has nothing to do with racism”, Alice Woods said: “We have been integrating with our African community here for over 15 years. We have no problems here with racism. We mean our local African-Irish, Chinese-Irish children too. They are Irish citizens.”

They “of course” would not protest if there was “housing for everyone who needs it”, said Ms Woods, adding t the current dearth of housing “stokes racism . . . it makes you bitter . . . we haven’t a problem with anyone who needs a house, but it has to be done fairly”.

The group’s members said they would like the housing allocation system explained. They said they are not affiliated to any far-right groups.

A Clúid spokesman said he did not know when construction would resume. The housing body has no say in who would get the homes, he added. “Fingal County Council will allocate these homes to the people on their housing list.”

The council said: “We have long-established policies which are the fairest way possible of allocating housing to those on the list. The council is responsible for meeting the housing needs of the community which includes the elderly, the disabled, the homeless, the Traveller community and also a growing migrant population.”

There are 6,959 applicants on the council’s housing list who indicate a preference for the Dublin 15 area, the council said.