New Church of Ireland bishop of Connor is elected 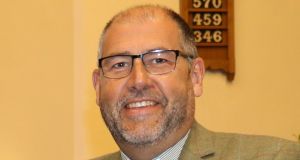 The newly elected Church of Ireland bishop of Connor is Archdeacon of Belfast George Davison (55). He succeeds Bishop Alan Abernethy, who retired at the end of December last. The diocese includes most of Co Antrim.

Rector of St Nicholas’s Church, Carrickfergus, Co Antrim, and an honorary secretary of the Church of Ireland’s General Synod, the newly elected bishop was previously archdeacon of Kilmore and rector of Kinawley, in the Kilmore, Elphin and Ardagh diocese.

Ordained in 1992, he began his ministry in the diocese of Armagh as curate of St Mark’s, Portadown, where he remained until 1995, when he became rector of Kinawley. Married to Nadine, he has two adult children, Erin and James.

He was elected following a meeting of the Electoral College for the Diocese of Connor, which took place in the Alexander Synod Hall, in Armagh, on Monday.

President of the electoral college and Bishop of Tuam, Killala and Achonry Patrick Rooke said he was confident the newly elected bishop “will be a popular choice and a wise and caring leader in a diocese he knows well.

“I look forward to working alongside him in the wider church and wish him well as he prepares for this new phase of ministry.”

For his part, the archdeacon said he was “very conscious of the great responsibility that is being entrusted to me.

“I am immensely thankful for the gifted colleagues who serve the church in Connor diocese and look forward to serving with them as we seek to share the good news of Jesus Christ in the years ahead.”

Following approval by the Church of Ireland House of Bishops, the archdeacon will be consecrated as bishop of Connor on a date yet to be determined.

Meanwhile, it has been announced that the House of Bishops will meet to elect a new archbishop of Armagh and primate of All Ireland on February 27th and 28th.

It follows the retirement of Archbishop of Armagh Richard Clarke on February 2nd.