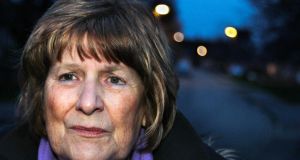 Elizabeth Coppin: ‘We have been conned and scammed and they’re still denying our human rights were violated.’ Photograph: Joanne O’Brien

A Magdalene survivor, who says she has been denied justice by the State for over 20 years, is taking her case to the United Nations.

The UN Committee Against Torture has begun an investigation into the State’s treatment of Elizabeth Coppin (70) which could have implications for the State’s approach to historical abuse.

It is a landmark case, being the first before the committee from a Magdalene survivor.

Originally from Listowel, Co Kerry, Ms Coppin was born to an unmarried woman (19) in a Killarney mother-and-baby home in 1949.

In 1951, she was committed by the courts to an industrial school in Tralee. From age 14, she spent four years in laundries in Cork and Waterford.

Now living in England, Ms Coppin alleges she was subjected to severe abuse and “the State still fails to investigate, acknowledge or address that abuse”. She says she has exhausted all domestic remedies.

Her case has been deemed admissible by the committee despite the fact she received ex-gratia payments for the abuse endured in the industrial school and the time she spent in the laundries, and signed a statutory declaration waiving her right to take action against the State.

Speaking to The Irish Times from Cambridgeshire, she said: “What we got wasn’t good enough. We have been conned and scammed and they’re still denying our human rights were violated.”

The Government was notified by the committee it was admitting Ms Coppin’s case on 20th January.

“The Department of Foreign Affairs are taking the lead on co-ordinating a response and a number of departments will be required to provide input,” a Department of Justice spokesman said. “The deadline for providing a response is 20th May, 2020,” he added.