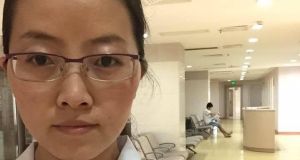 Dr Li Tao: advises people not to wear face masks in public because there are “zero cases in Ireland” and it “causes panic”.

Chinese families across Ireland are voluntarily placing themselves in “self-isolation” for two weeks following trips to China to avoid any risk of the coronavirus spreading to this country.

Ann*, who returned to Ireland last weekend after visiting family in China, arranged to work from home for a fortnight before flying back.

“Even though the chances were low, I didn’t want to create a risk for friends or colleagues. I knew the embassy had suggested you quarantine yourself for two weeks. I want to make sure I’m a responsible citizen and show respect to the society where I live.”

Fifteen suspected cases of coronavirus have occurred in Ireland but there have been no confirmed cases of the disease so far. The virus originated in the city of Wuhan in China and has led to more than 630 deaths and more than 31,000 recorded infections since January.

While in China, Ann tried not to leave home too often or travel unnecessarily. “The Chinese new year is like Christmas here, it’s very quiet. There is a tradition for people to visit their relatives but because of the outbreak the government suggested people use webchat and video calls instead.”

Those who need to move around face regular temperature checks along motorways, at train stations and in airports by Chinese health officials, she said.

Ann says Irish friends have been very supportive since her return. However, racism towards “anyone with an Asian face” has noticeably increased since the outbreak was announced, she says, adding that claims the virus is caused by Chinese cuisine are particularly offensive

“The Chinese diet has existed for over 5,000 years. Saying that the coronavirus is caused by the Chinese diet is misleading and causing a lot of unnecessary anxiety. It leads to blame and alienation.

“No virus is unique to any single person or society. This is a battle between human beings and the virus, not nationalities. Nobody should be using this to target people from another nation.”

Another Chinese woman, who prefers not to be named, has imposed a seven-day quarantine on herself and her family after returning from Shanghai last week. Most employers are now requesting a doctor’s certificate before those who have travelled from China return to work, she says.

Chinese families in Ireland who have chosen to self-quarantine and are keeping in touch through social media say abuse towards members of the Chinese community has risen.

“You hear of kids coming home upset because other kids were shouting at them about the coronavirus,” she told The Irish Times, adding that she herself was shouted at by a man on the street this week. “It’s definitely putting a lot of pressure on the Chinese community but I wouldn’t say it’s necessarily racism. It’s just people are genuinely fearful.”

Some members of the Chinese community who are not in isolation are fundraising to support hospitals back in China. The Love Actually Charity – which is based in Ireland – recently raised €16,000 to purchase thousands of face masks, medical gloves and protective gowns.

The Department of Justice has also extended a number of visas for family members who travelled to Ireland before the virus outbreak, a move all interviewees for this article say is much appreciated by the Chinese community.

Ling, who prefers not to give her surname, says while most Irish media have been respectful in reporting the virus, some tabloids have sensationalised the health emergency. A recent headline which warned of a “China virus at Dublin Airport” was “deeply hurtful” to the Chinese community, she says.

“It’s not the China virus, it’s the coronavirus. I understand that it’s from China but the crazy cow disease was never an English or Irish disease. We live here as Chinese but we’re part of Irish society. We don’t want the virus here either.”

The Chinese language school where Ling’s children attend classes on a Saturday has also been closed as a precaution, while anyone experiencing flu-like symptoms has been advised to register with the embassy, she said.

Dr Li Tao, a qualified medical doctor and practitioner of acupuncture and traditional Chinese medicine in Dublin, has received text messages from concerned patients but says she has not needed to send anyone to hospital yet.

She is advising patients not to wear face masks in public because there are “zero cases in Ireland” and it “causes panic”. People should just eat healthily, take exercise, wear warm clothes in the cold weather and wash their hands – all the normal precautions one should take to stay healthy, she says.

Dr Tao has noticed some online racist commentary towards members of the Chinese community but does not believe this behaviour is representative of general Irish society. “These are just individuals, they don’t represent the Irish people. We rarely encounter racism working here.”

*Requested that pseudonym be used given nature of article