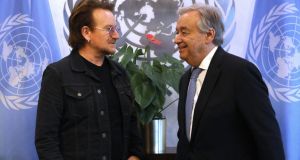 U2’s Bono and António Guterres, the UN secretary general, in New York for the launch of Drive for Five. Photograph: Spencer Platt/Getty Images

The Government on Tuesday night hosted the formal launch of a global campaign to encourage governments to ensure better access to education for adolescent girls.

U2’s Bono and former president Mary Robinson were among the speakers at the Drive For 5 campaign at the UN headquarters in New York. The event highlights that 130 million girls worldwide do not attend school.

The initiative calls for governments around the world to commit to five transformative actions including access to 12 years of free quality education for girls, a supportive school environment and adequate water, sanitation and hygiene facilities.

Launching the campaign, Ireland’s permanent representative to the UN, Geraldine Byrne Nason, described the scale of the number of girls not receiving education in the world as “one of the great injustices of our time”.

Ms Byrne Nason said the Drive For 5 initiative was designed to pull such females out of poverty and inequality. “It’s not about charity but investment,” she added.

The UN heard that the Irish Government has committed €250 million over the next five years towards global education.

Ms Byrne Nason said Ireland wanted to provoke a collective action by UN states in what was a “once in a generation opportunity”.

She said Ireland had been transformed from one of the poorest countries to one of the most highly developed in Europe in the space of two generations, which she attributed to the introduction of free secondary education in the 1960s.

“It was simply revolutionary and particularly for girls, and we have seen the results of such investment.”

Addressing the launch ceremony, UN secretary general António Guterres said he had no doubt that the first priority for creating a better world was ensuring a quality education for all.

Mr Guterres, a former teacher, said countries also had to ensure there was gender parity in their educational systems.

Although great strides had been made since a UN conference in Beijing 25 years ago when education was declared a human right, Mr Guterres said many gaps remained, with girls still being disadvantaged.

He pointed out that the gender pay gap stood at 20 per cent globally, while social and institutional barriers were still preventing many females from taking up positions in the STEM (science, technology, engineering and maths) sector.

Mr Gutteres described one of the most worrying trends as how the technology sector and particularly Silicon Valley firms still had a male-dominated culture. “These are shaping economies and societies of the future.”

Former UN High Commissioner for Human Rights Mary Robinson said political will at the highest level was needed to bring about change, and she expressed hope that political leaders would put themselves in the “shoes and minds” of uneducated young girls. “It is important for the economies of countries that we educate girls.”

U2 singer and co-founder of the ONE campaign to fight extreme poverty and preventable disease, Bono told the gathering that the entire success of the Irish economy has due to the country’s investment in education.

“I’ve done very well out of it. I went to a school where I met my three other band members as well as my missus,” he joked.