Saturn’s rings may be a relatively recent phenomenon 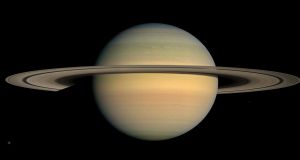 Image made available by Nasa shows the planet Saturn, as seen from the Cassini spacecraft. Photograph: Nasa/JPL/Space Science Institute via AP

Saturn’s rings are one of our solar system’s magnificent sights, but they may be a relatively recent addition, according to data obtained from Nasa’s Cassini spacecraft before the robotic explorer’s 2017 death plunge into the giant planet.

Scientists said on Thursday that a calculation of the mass of the rings based on gravitational measurements of the planet collected by Cassini indicated they formed between 100 million and 10 million years ago, in roughly the final 2 per cent of Saturn’s current age.

On Earth, 100 million years ago was during the dinosaur age.

The findings challenge the notion favoured by some astronomers that the rings developed soon after Saturn formed about 4.5 billion years ago. Other astronomers felt the rings were much younger, but lacked crucial data like their mass to estimate their age reliably.

“I like the rings and their fascinating dynamics, whether they are young or old,” said Sapienza University of Rome aerospace engineering professor Luciano Iess, lead author of a study on the data published in the journal Science.

Saturn is the sixth planet from the sun and the solar system’s second-largest, after Jupiter. All of the four gas planets possess rings, though Saturn’s are the biggest and most spectacular, with a diameter of about 282,000km. The rings are 99 per cent ice and 1 per cent silicate particles from interplanetary debris.

Their mass turned out to be 45 per cent lower than previous estimates based on 1980s data from Nasa’s Voyager spacecraft. Lower mass indicates a younger age, the researchers said, adding that the still-bright rings would have been darkened by debris over a longer period.

There may not be a more precise answer about the origin and age of Saturn’s rings “until we can get samples of ring material in our labs to examine, and possibly date via radioactive decay,” said Cornell University astronomy professor and study co-author Phil Nicholson.

Data from Cassini’s final orbits, when it dove between Saturn and the rings as its fuel ran low, also provided insight into the planet’s internal structure, including a core estimated at 15 to 18 times Earth’s mass. – Reuters

2 More than half in North want vote on a united Ireland, poll finds