Ensuring better intestine absorption key to improvement, according to exhibition 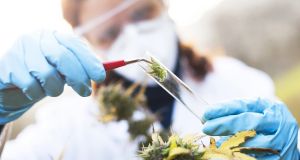 Cannabinoid medicines are increasingly being approved for the treatment of conditions such as epilepsy, multiple sclerosis, glaucoma, arthritis and cancer

The effectiveness of cannabis products in treating a variety of debilitating diseases can be significantly improved by ensuring they are better absorbed in the human intestine, according to Jennifer McCarthy, a sixth year student from Kinsale Community School in Co Cork.

She has successful designed a smaller dose – known as a “a nano-formulation” – to increase absorption of Cannabidoil from the hemp plant in the gastro-intestinal tract.

Her breakthrough, presented at the BT Young Scientist & Technology Exhibition, was achieved by using chemicals known as “surfactants” in making hemp oil droplets.

Cannabinoid medicines are increasingly being approved for the treatment of conditions such as epilepsy, multiple sclerosis, glaucoma, arthritis and cancer. Cannabinoids used in medical settings are usually in the form of THC (with a reduced level of the psychoactive element normally found in cannabis) or CBD oil – or a combination of both compounds.

Jennifer believed her results “will be of great benefit to the public, to patients and the pharmaceutical industry”. While her work enables CBD to be absorbed across intestinal walls into the bloodstream in a much more effective way, she believed her design could be applied to other “active pharmaceutical ingredients”.

Her design is “patent pending” and she hoped to extend her research by working on other products and testing their effectiveness in animals and humans.

On another health research front, Laura O’Sullivan, a fifth year student at Mount Mercy College in Cork, used artificial intelligence with a view to improving the effectiveness of cervical cancer screening, notably in reducing the number of false negatives that arise in testing.

Her work, she accepted, was at an early development stage but the improved accuracy had been established, she said. “More data is now needed.”

Using AI helps in that regard. “AI is capable of screening for cervical cancer and can be used to reduce the number of false negatives outputted by the classifier [of test images].This means there is a great potential for automated screening using AI to be developed in coming years.”

Hugo Langan and Matthew English, first year students at Cross and Passion School in Kilcullen, Co Kildare, built their own constant pressure calorimeter using a combination of a Coca-Cola tin inside a larger paint tin – and demonstrated that algae in powder form is a viable fuel source.

Their experiments, which took some time to perfect, were prompted by the need for new fuel sources. “With so many fossil fuels being burned to create energy, that is not very green,” Hugo explained.

Having seen an article in National Geographic magazine about the potential of algae, they gathered supplies of Fucus serratus from Co Dublin beaches in Sandycove and Killiney. Their initial testing suggested the plant was “virtually inflammable”, Matthew added.

But once they dried it and broken it down to powder, it performed very well in heat generation tests. The algae was almost as good as diesel, and better than methanol, he added. The young fuel chemists hoped algae will be the fuel source used in diesel-type cars in the near future.