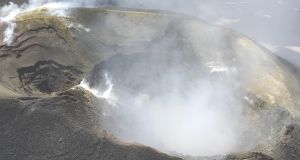 An aerial shot of Mount Etna taken during visit by the Trinity team. 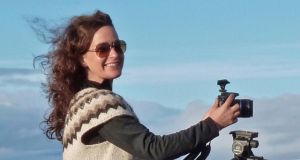 Siobhán McDonald: “For this trip, I was primarily looking at the consequences of our treatment of nature and exploring the notion of breath” 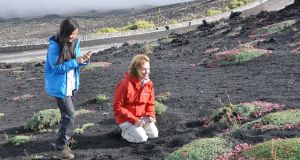 Jennifer McElwain and Weimu Xu of TCD on the slopes of Mount Etna. 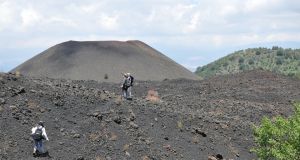 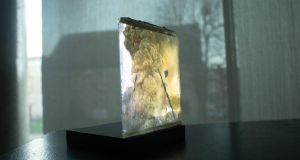 Study for a Volcano, an image of Mount Etna erupting, projected on to an old prisim by Siobhán McDonald – film by Christopher Ash.

With some 200 eruptive episodes to date, Mount Etna is Europe’s most active volcano. It also holds the record for the longest continuous eruption. The paroxysms that commenced during its most recent episode have yet to fully cease; an eruption is technically ongoing.

Last June the artist Siobhán McDonald travelled to Catania, Sicily, to study Mount Etna’s pulsing, volatile terrain, hoping to unlock the potential of its chemical make-up. Namely, that the ash clouds above Mount Etna might enable us to counter the damage caused by our planet-warming carbon emissions.

McDonald travelled with three scientists from Trinity College Dublin: Prof Jenny McElwain, chair of botany at the School of Natural Sciences, with whom McDonald has been collaborating; Laurence Gill, a professor in environmental engineering in the School of Engineering; and Prof Balz Kamber, chair of geology and mineralogy.

McDonald is a visual artist working in painting, drawing, film and sound. Concerned primarily with elusive knowledge that continues to evade scientific inquiry, her works explores the origins of life on this planet and the information held within plant life.

As such, her practice occasionally entwines with science and its endeavours, and earlier last year McDonald was awarded the Trinity Creative Project on the basis of Future Breath, a series of inquiries into breath as our point of overlap with nature and the insidious detriment pollution weaves through our bodies and the ecosystem.

In breath, the reverberations of man-made toxicity are readily discernible: the interface between our bodies and our environment is rich in contaminants that wreak cellular damage in human and plant anatomy alike. As such, McDonald has drawn from wild Irish plant life, considering the templates their respiratory systems may offer for the breaths we will take in the future.

As witnesses to previous and future climatic conditions we have no access to, plant life offers us invaluable information, and it is this material that McDonald seeks to rework and analyse through an artistic lens.

On the expedition to Mount Etna, her intention was again to examine natural processes and forces, as well as the minutiae of the rocks and the history of exploration in the territory. She notes, “For this trip, I was primarily looking at the consequences of our treatment of nature and exploring the notion of breath.”

That a natural process might combat the 400 billion tonnes of CO2 we annually pump into the atmosphere was first suggested by calcite filaments appearing on rock face. These chalky, granular carbonate threads indicated the rock-based substances they coated may absorb CO2, and so be capable of storing some of our heat-trapping emissions. Since then, basalt, ash and glacier milk have been identified as possible vessels, though which substance is the more pliable, mutable and reactive remains to be seen.

The carbon-capturing stones in Oman, for instance, consist largely of peridotite, a coarse-grained, igneous rock whose chemical potential is activated once exposed to air and water. The terrain enacts a natural process called carbon mineralisation; a process Dr Peter B Kelemen, a Columbia University geologist, would like to pursue via direct-air capture, sometimes described as a form of geoengineering. In 2011 in Iceland, hundreds of tons of water and CO2 gas were injected into layers of porous basaltic rock, the product of ancient lava flows from the Hengill volcano, to determine if the gas could be stored underground.

Mount Etna’s ash, however, holds special promise not only because it’s in such abundant supply, but because it’s available in loose particles rather than solid rock. As such, as well as employing the environmentally benign direct-air capture method, it requires minimal human intervention compared to such high-pressure injection or quarrying.

It was Vincent Fournier’s photograph of Kelemen in the New York Times that first compelled McDonald to research natural substances that might sequester human-induced carbon emissions. Dwarfed by the unflinching rock-face at Oman, the image of Kelemen captures the magnitude of our planetary crisis as well as the scale of our finite, fleshy bodies against the infinite, immeasurable damage they have caused.

Glacial Rock Flour Garden, a collaborative work by geologist Minik Rosing and artist Olafur Elaisson, similarly combines artistic and scientific inquiry to imagine a scenario where environmental damage to the planet can be halted, if not reversed. Made in 2016, the piece consists of the circular space in the middle of the Bosquet de la Colonnade in Versailles being filled with a thick layer of moraine, which is granite ground by moving glaciers into a fine grey powder.

The claylike material surrounds François Girardon’s sculpture of Pluto abducting Persephone, the goddess of fertility, and Rosing plans to export moraine rock flour from Greenland to subtropical and tropical areas, where, as a rich source of mineral nutrients, it will revitalise depleted soil. A degree of poetic interpretation is exercised in linking an abducted symbol of fertility to soil starved of mineral nutrients, and the piece is dependent on scientific rigour and the potential for substantive change if we correctly manipulate our environment.

Akin to McDonald’s approach is the desire “to draw attention to the porous nature of reality and the tipping of natural balances in the environment”.At Mount Etna, “porous nature” suggested those processes that see hot atmosphere transferred to cool ash, and “the tipping of natural balances” – the possibility that gas might be permanently extracted from the atmosphere.

On site at the volcano, McDonald took part in an in-depth, continuous involvement with the landscape and the substances it consists of. By taking heed of material messages from the earth and the urgency with which they’re delivered, we can not only glean new pragmatic knowledge, but also begin to grasp on an emotional level the upheaval occurring within our ecosystems.

Aware of the sensitivity of Mount Etna as a site, McDonald considered the terrain as a barometer for our own vulnerability, and a reminder of how indelibly we are conjoined with nature and its workings. As such, she focused on such details as “the inexorable growth of the tiny plant roots found growing on the walls of the caves” and how this slow, subtle growth runs concurrent with “the headlong pace of human time”.

On the expedition, McDonald says: “My gaze was mostly directly down to my feet, to the geological materials that lie beneath the earth’s surface. We talked constantly about geological materials, minerals and metals and plant responses. Our conversations shed light on otherwise invisible themes, offering alternative concepts that have given me a new understanding of the fundamental connection between man, mineral and plants.”

McDonald’s research on Mount Etna has inspired her to address Bronze Age linear earthworks in Ireland, called the Black Pig’s Dyke. In a new exhibition entitled Hidden Monuments, she presents a series of artistic enquires to remind us that the carins and standing stones that foreshadow our landscape act as reminders of climate change.

The work comprises a series of paintings and sculptures using gold and charcoal as materials. Charcoal is steeped in Irish history and connects the invention of tools with the erection of monuments and rituals to the sun when Ireland was in a weather crisis circa 100 AD. As part of her research, she has been investigating a line of geology across Ireland.

Art critic Tom Jeffreys has remarked: “McDonald commemorates the vast diversity of the environment we inhabit and explores our equally diverse responses to it. She does so and with an aesthetic that is at one coherent, understated and quietly powerful.”

Sue Rainsford is a writer and researcher based in Dublin. Her debut novel, Follow Me To Ground, is published by New Island Books