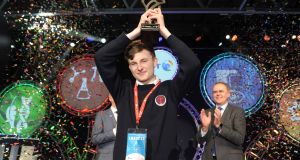 Adam Kelly from Skerries Community College is announced winner of the 2019 BT Young Scientist of the Year. Photograph: Aidan Crawley

A 17-year-old student at Skerries Community College in Co Dublin, who has developed a series of digital tools for use in the quantum computing, has won top prize at the 55th BT Young Scientist & Technology Exhibition.

In building the giant computers of the future, fast and accurate simulations are vital. Adam used algorithms “to analyse, optimise and simulate quantum circuits in the most efficient ways”, he explained to The Irish Times.

Large-scale quantum computers are the next frontier in advanced computing but they are not yet widely available, which means there is a requirement for algorithms that can carry out fast, accurate simulations.

Adam, who is in fifth year, is already building an impressive track record. He won the overall 2018 SciFest prize, and last year was part of a group which won first place at the young scientist exhibition in the chemical, physical and mathematical sciences category.

Chair of judges in that category this year, Prof Sean Corish, said Adam had “developed a tool to select the optimum algorithm for the simulation of particular quantum circuits, which may inform development of a practical quantum computer, which is still at an early stage”. This has implications across many areas, including cybersecurity.

He confirmed his work had already come to the attention of key industry leaders. “Adam’s contributions are underpinned by a fluency in what is a highly technical and complex field which hugely impressed the judges.”

The SciFest win was for work on a particular simulation, deploying open source software freely available online, which is up to 15 times faster than conventional simulators. It is available for anyone to use.

He developed an initial prototype two years ago and has enhanced it on a regular basis since. The work is a combination of physics, computing and maths, he explained - the outcome has been gratifying as others all over the world have confirmed it works.

During the summer of 2018, he worked with the Dublin web developing company Kooba, at the end of which he treated himself to a new laptop, he said.

“Quantum computing will never replace classic computing,” Adam said. “It will excel at tasks that are too complex for computers.”

He cited the example of a caffeine molecule. “If we want to completely understand how this single molecule impacts on our brain, it’s impossible. There is just too much information. Quantum computers would be suited to this sort of problem.”

A traditional computer is a binary device, using “bits” represented either by one or zero, while a quantum computer works off “qubits”, meaning an action can be a one, zero or both at the same time.

Quantum computing also takes advantage of the strange ability of subatomic particles to exist in more than one state at any time. Due to the way the tiniest of particles behave, operations can be done much more quickly and use less energy than classical computers. This enables a quantum computer work at unprecedented speeds on vast calculations, such as complex problems of astronomy, climatology or modelling chemical interactions.

They have made a car paint - from a combination of two organic photovoltaic compounds used in solar panels that can transmit energy to an EV battery. Organic solar cells are thinner, more flexible and cheaper than inorganic solar cells. The idea emerged while carpooling to school together.

The paint, based on average sunlight in Ireland, can help deliver a vehicle range of up to 100 kilometres a day, they have calculated.

“We plan to continue to work on this, to develop the product, extend the range, and contribute to providing solutions to climate change,” Aoife said.

Runner up in the individual category was Yasmin Ryan (16), a pupil at St Andrew’s College, Dublin, who discovered the ideal circumstances for cells in the pancreas, known as the islets of Langerhans, to produce insulin, which controls blood sugars. Her observations were judged to “have profound potential implications for the long-term treatment of diabetes and cell transplantation”.

Group runner-up prize was awarded to Danila Fedotov (17) and Filip Caric (18) of North Monastery Secondary School in Cork, who devised a wearable device which alerts care providers looking after older people and those with dementia.

The device is worn on the arm, and took three years to develop. It detects falls and can identify what room a person is in, and then sends an alert by text message to a carer. The students intend to develop the product for use with wifi and to work on reducing the device’s size.

As overall winner, Adam Kelly received €7,500, and will represent Ireland at the EU Contest for Young Scientists in Bulgaria this September. He received his prize on Friday in the RDS from Minister for Education Joe McHugh, and BT Ireland managing director of Shay Walsh.

BT Ireland won the 2019 founder medal for its sponsorship of the exhibition over the past 19 years. Co-founder of the event Dr Tony Scott presented the award to exhibition organiser Mari Cahalane.