This June, it will be 100 years since world’s first non-stop transatlantic flight took place 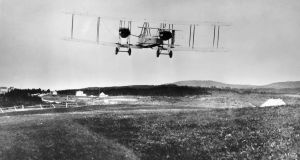 It is probably easier to look back and weigh the importance of a particular scientific achievement of the past than to predict how science will influence the future. The following anniversaries can be marked in 2019 and offer a chance to reflect on change and continuity in science, technology and medicine.

The 16th century seems to be littered with dates of historical importance including Martin Luther’s protest against indulgences in 1517 and the fall of the Aztec city of Tenochtitlan to Spanish forces in 1521. This year we should celebrate the 500th anniversary of the departure of Ferdinand Magellan for the voyage that would circumnavigate the globe. Magellan, although Portuguese, was sponsored by the Spanish crown and departed from a city in Andalucia. He crossed the Atlantic and passed south of the tip of modern day Chile before heading across the Pacific Ocean (which he named). Magellan died in the islands now known as the Philippines in 1521 but some of his crew and one of his ships returned to Spain in 1522, thereby completing the voyage around the globe.

In 2018 twin babies were born who, He Jiankui claims, had their genetic vulnerability to HIV altered. In the age of genetic medicine, it is worthwhile celebrating the anniversary of an early medical book on hereditary disease. Dermot O’Meara’s work is considered the first book published in Latin in Dublin. O’Meara was a physician attached to the Butler dynasty who claimed (perhaps falsely) a degree from Oxford. He was an adherent of the new system of chemical medicine advocated by the Dutch physician Paracelsus in opposition to more traditional humoral medicine. He is also known for his apparent objection to quackery at a time when practising “physic” was relatively unregulated in the British Isles. His text on hereditary disease reminds us not only of the ancient interest in this topic but also of the international intellectual networks that governed medical thought and which Irish practitioners participated in.

The astronomer Edmond Halley, a member of the Royal Society and an associate of Isaac Newton’s, had calculated the orbit of many comets but his name was posthumously attached to the comet that appeared in 1682. This comet, Halley predicted, would return in about 75 years. Halley died in 1742 but a group of French astronomers including Nicole-Reine Lepaute correctly predicted the return of the comet in 1759 and it became known as Halley’s Comet after. Lepaute, who played a central role in the tedious and complex calculation of when the comet would pass closest to Earth, suggests the significant intellectual contribution women made to the Enlightenment. The comet itself is not predicted to return until 2061.

1819: Laennec published a book on the use of the stethoscope

If you conjure the image of a doctor in your mind chances are that you picture the stethoscope around their neck. The inventor of this ubiquitous medical instrument was René Laennec. While the device may have been invented in 1816, Laennec published a description of the stethoscope and its uses in 1819. Laennec’s stethoscope was a specially designed wooden tube that allowed the doctor to listen to the inside of the patient’s body without violating propriety by applying an ear directly to a back or chest. It proved especially useful to physicians concerned with the rising epidemic of tuberculosis (also called phthisis or consumption) although it would be many more decades before doctors had effective remedies for the disease.

1919: Alcock and Brown crossed the Atlantic from Newfoundland to Ireland

At 8:40am on June 15th, 1919, two men stepped out of a plane in Clifden, Ireland and made history. John Alcock and Arthur Whitten Brown had piloted a Vickers Vimy airplane from Newfoundland to Ireland in the first nonstop transatlantic flight. They had flown the plane, with its two Rolls Royce engines, about 120 miles per hour. Similar to most aviators of the age, they had gained considerable flying experience during the Great War. The trip took just over 16 hours but signalled the imminent possibility of commercial transatlantic flight.