Moon tourism and automated farming are the next big things, according to survey 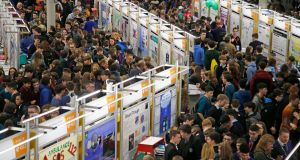 More than 450 students, out of 1,131 people exhibiting at the BT Young Scientist & Technology Exhibition, participated in the Gengage survey. Photograph: Nick Bradshaw

Young scientists are an optimistic bunch, believing technology will transform people’s lives this century despite the threat of climate change.

The coming decades might not see hover cars, time travel or a real life Jurassic Park but moon tourism and automated farming is just around the corner, according to a survey of participants at this year’s BT Young Scientist & Technology Exhibition (BTYSTE).

More than 450 students, out of 1,131 people exhibiting, participated in the “Gengage” survey, which identified the biggest priority among respondents for the next 10 years as reversing the effects of climate change.

Among the survey findings were:

61 per cent think technology will be a force for good for future generations.

In terms of the next big technological breakthrough, 40 per cent of BTYSTE participants think the health sector will see the greatest advances. One in four believes science will provide the biggest innovations.

One in six think moon tourism will be mainstream by 2029.

Despite the uptake of electric cars, 72 per cent of participants do not think hover cars will be mainstream in the next 10 years.

Nearly three in four think fully automated farms are around the corner (74 per cent).

Two-thirds (67 per cent) think virtual schools, with classes on live stream, will be the norm by 2029.

60 per cent of participants think signs of alien life will be discovered in the universe at some point.

87 per cent of students think a breakthrough in time travel is unlikely in the near future though one in five would like to see it happen.

Nearly 50 per cent of students would like to see the effects of climate change reversed in the next decade but one-third remain sceptical that it will actually happen.

Dublin Zoo won’t be having any retro arrivals anytime soon, as 87 per cent of students do not think dinosaurs will be making a comeback in this century.

Other projects touch upon topical issues from cervical cancer screening, an alternative to and benefits of antibiotics; and the growing negative impact of social media – especially on young people.