Use of antibiotics to control disease among livestock must be reduced, warns expert 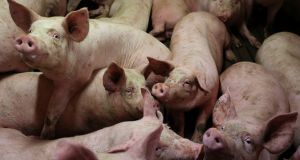 Modern farming of livestock means pigs and chickens often live crowded together prior to slaughter – the perfect environment for the spread of disease. Photograph: Reuters

The ever-increasing intensification of livestock farming in Ireland – and globally – has led to the dangerous growth of antibiotic-resistant “superbugs” in animals such as pigs and chickens – and represents a growing threat to human health.

The precise threat to humans from animal superbugs is disputed by experts, but what is not in doubt is that the excessive use of antibiotics in livestock to control disease has led to a resistance problem with growing evidence it could easily get out of control.

“It is a worldwide, huge, problem and we must do something about it,” says Dr Nola Leonard, a veterinary surgeon and lecturer in veterinary microbiology at UCD, who has researched the resistance problem in pigs and poultry in Ireland.

Modern, intense farming of livestock means animals often live crowded together prior to slaughter.  When diseases arise, high doses of antibiotics are used to bring them back to health

The routine use of antibiotics to control disease among Irish livestock must be reduced and this is acknowledged by many farmers, she adds. Yet there remains some resistance among older farmers to the changes required.

“Some older farmers – although it is a bit of a generalisation – are a bit afraid of change. If they have always done it one way, why should they change? They are afraid that they are going to get a big, huge outbreak of disease if they reduce their antibiotic use from what they used to use,” Dr Leonard says.

Modern, intense farming of livestock means pigs and chickens and other animals often live crowded together prior to slaughter. This is the perfect environment for the spread of disease, and when diseases arise in such circumstances, high doses of antibiotics are used to bring them back to health.

Dr Leonard says great strides have been made in the past year to reduce the increase in antibiotic resistance in poultry. Against that, the pig industry, which is more economically vulnerable because farmers have to import cereal feed products, may require Government support before things improve.

“We know, for instance, that there is a level of overcrowding in the pig industry at the moment. But, in order to fix that, and keep their profitability, they need subsidies to build better buildings so they can house their animals with less overcrowding,” she says.

The European Union, as well as the World Health Organisation (WHO) and the Centre for Disease Control in the United States are among the bodies concerned about the growth of antibiotic resistance in livestock and what it might mean for human health.

The situation in Europe is monitored via European Surveillance of Veterinary Antimicrobial Consumption (ESVAC), whose reports show how each EU member state is doing on the resistance levels present in their livestock. Ireland “isn’t one of the really high-use countries”, according to ESVAC.

Against that, Dr Leonard adds, the ESVAC reports might be rosier for Ireland than the reality given the huge number of cattle that are raised here out on pasture, where diseases are far less likely to spread. ESVAC reports base their findings on antibiotic resistance found across all livestock in a country.

In October 2017, the Department of Agriculture, Food and the Marine and the Department of Health jointly launched a National Action Plan on Antimicrobial Resistance (iNAP) for the period 2017 to 2020. This was part of the EU “One Health” strategy to bring both animal and human health authorities together to tackle the resistance issue in animals and its implications for human health.

The setting up of iNAP was a significant policy move for Ireland, as for decades animal and human health had been treated entirely separately by government.

The UK government commissioned a review on antimicrobial resistance, which was chaired by economist Jim O’Neill and published in May 2016. It predicted antimicrobial resistance will be a greater cause of human death than cancer by 2050, while 10 million people will die annually by then as a result of resistance; up from an estimated 700,000 today.

The O’Neill report prompted the UK chief medical officer, Prof Dame Sally Davies, to state: “We have reached a critical point and must act now on a global scale to slow down antimicrobial resistance.”

The WHO supported its stark warnings by referring to antimicrobial resistance as “a slow moving tsunami”.

In 2017 a “Raised without Antibiotics” label appeared on some bacon products sold in major supermarkets. It has the support of the Alliance to Save our Antibiotics (ASOA), an EU-wide group which brings together health, medical, farming and environmental groups, who advocate adoption of farming practices that will reduce animal disease and need for antibiotics.

In the US, the NSF International, a public health and safety organisation founded in 1944, has a “Raised Without Antibiotics” certification, which applies to meat, poultry, fish, dairy and eggs. The NSF states its label “provides consumers with assurance that the animal products they buy have been produced without exposure to antibiotics”.

The Republic’s chief veterinary officer Martin Blake says he would not support the introduction of antibiotic-free labelling on food products in Ireland. “Foods on the market are already antibiotic free, as there are rules in place about the usage of antibiotics and residue testing regimes are in place,” he notes.

The use of antibiotic-free labelling is a marketing tool with the potential to negatively impact on ethical farming, as it could lead farmers to discard animals that become ill, rather than treat them with antibiotics, Blake adds. This was not ethical treatment of sentient beings, and he wouldn’t support it, he says.

Yet, pressure for antibiotic-free labelling in Ireland is likely to build if the resistance problem gets any worse – and there are worrying signs in this regard.

There have been occasional reports from regional veterinary laboratories that there there is no antibiotic available to treat sick animals. That is a worrying sign that general resistance to antibiotics is building up in livestock.

But the threat can come from many sources. UCD veterinary hospital is working on multiple resistant Staphylococcus pseudintermedius (MRSP), described by Dr Leonard as “the dog equivalent of MRSA”, which is proving extremely difficult to treat in some cases.

Other research at UCD has found the use of fluoroquinolones to treat chickens when they are sick is “pre-priming” bacteria to act aggressively when they get into the human intestine. These bacteria they can survive in bio-films on chicken products in supermarkets and cause illness when ingested by humans.

There is also the particular threat of resistant microorganisms emerging in Asia, or some other part of the world, and arriving in Ireland via animal products or humans. African swine fever, a resistant virus which travelled all the way from China to Belgium is an example of that, Dr Leonard points out.

“It is horribly worrying. I really do worry about all these things and what we are leaving to our children and grandchildren.”