Room to improve: solar panels that heat homes all year round 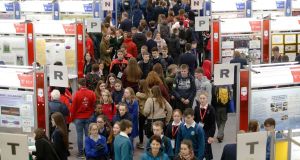 BT Young Scientist & Technologist of the Year Exhibition: drew more than 15,000 people to the RDS on Thursday. Photograph: Nick Bradshaw

Sitting at home watching an episode of Room to Improve on RTÉ television with her father, Ava Kate Beausang (17) quickly came to the realisation that most solar panels used on Irish houses were of limited value, heating water only and not fulfilling a role for much of the winter.

The fifth-year student at St Aloysius College in Carrigtwohill, Co Cork, has since developed “the Becquerel Roof” – which she named after the French developer of solar photovoltaic (PV) panels.

Combined with the use of thermostats, the roof is much more versatile, she said, with the potential to heat a house all year round and deliver energy savings of 20-50 per cent on a typical household bill.

Ava Kate acquired an insulated shipping container which is “very cold in winter and very hot in summer”, attaching her roof to one end, and using the other end as a control. Over six months, she tested the effectiveness of various metals in her panel – tin absorbed most heat but copper retains it better over time.

Her prototype, which she has been developing since August 2017, enables the replacement of slates and the reduction of fossil fuels in domestic settings – her home is a “passive house”, with no carbon emissions. She acknowledged the help of Passive Sills insulating company in Youghal in supporting her research.

She has sought a patent for her design, and has outlined her work to experts in UCC and Cork Institute of Technology. She has also applied for a €50,000 “developer idea” grant under the Horizon 2020 research programme. “I even had a potential investor call me,” she added.

Katie McCarthy and Róisín Ryan, first-year students from Coláiste Mhuire Co-Ed in Thurles, Co Tipperary, succeeded in generating a bioplastic from milk, which they believed had the potential to replace polluting synthetic plastics that take hundreds of years to break down in the environment.

After heating milk combined with vinegar, they separated out the casein component and then dried the resulting bioplastic. Much of their subsequent work has been trying to get the solubility of the substance right, so it doesn’t absorb water and ensuring the product is not too brittle, Katie explained.

With the help of Limerick Institute of Technology, they tested the performance of their product, notably its wear resistance. Since getting back results, they have tried to reduce its solubility, even using cement to improve its strength. “We knew this was not environmentally the best, but next year we are going to try adding starch instead,” Róisín added.

They believe their bioplastic is suitable for use as buttons, umbrella handles or fountain pens with the strong environmental benefit that it breaks down after three to six months in the environment. While the best combination of ingredients has yet to be determined, “we believe it can contribute to a better environment”, she said.

The BT Young Scientist & Technology Exhibition attracted large crowds, in excess of 15,000 people, to the RDS on Thursday, the first day it was open to the public. Tickets were sold out for the day, and are all sold for Friday morning. Some tickets are available for Friday afternoon and Saturday through btyoungscientist.com