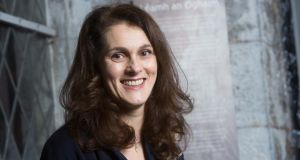 Dr Deirdre Murray: “I am extremely lucky to be doing a job that I love, answering important questions about children’s health. What could be better?” Photograph: Darragh Kane

A lot of parents and babies take part in your studies in Cork. What have you been researching?
“One of the great things about being a researcher in Ireland is how willing parents are to get involved in research. Our Baseline study, funded by the National Children’s Research Centre, has worked with more than 2,000 mother-child pairs through pregnancy, birth and early childhood up to age five so far. With their help, we have been able to look at many aspects of normal growth and skin barrier function, and we have published over 40 papers in the areas of children’s growth, allergy, nutrition and development.”

You are particularly interested in a type of brain injury that is linked to a lack of oxygen around the time of birth. Tell us more.
“Hypoxic-ischaemic encephalopathy (HIE) is one of the commonest causes of acquired brain injury in children. Interruption of the oxygen supply for even a few minutes can sometimes lead to permanent disability. Long-term problems are variable, from death in the most severe cases to movement or learning difficulties in those who survive. Over a million babies die worldwide from HIE each year, and in Ireland it affects around 200 babies annually.”

How are you looking to minimise the effects?
“One of the ways we can tackle HIE is to cool the baby for 72 hours after birth. The tricky thing can be deciding which babies will benefit. Currently we probably miss about 20 per cent of babies who should be cooled, as the decision has to be made within six hours of birth. With the Karolinksa Institute in Sweden and with funding from the Health Research Board, we have been collecting and analysing blood samples from the umbilical cord. We are seeing patterns in those blood samples that could possibly tell us about encephalopathy in the baby, and we hope this will lead to a reliable bedside blood test to quickly identify if a baby needs help.”

You also look at brain and cognitive development in babies and toddlers. Is that a challenge to measure?
“It can be, because current approaches often depend on the child being able to understand someone asking them to do something. So we worked with a gaming company, Hello Games UK, to develop the Babyscreen app that children aged 18 months and up can use on touchscreen devices without the need to understand language. That app is now being used by researchers in London, Cambridge, Doha and Gambia in their projects, and we are just about to start a new project to develop the next version.”

What do you do to take a break from work?
“I would love to claim lots of interesting hobbies but I am afraid there aren’t enough hours in the day, and around 10pm I collapse on the couch with my husband, Paul. Time with my three kids (who are 11, 13 and 15 ), doing whatever they want to do, fills my weekends.”

And what’s the best part of your day at work?
“The great thing about paediatrics is seeing a happy child ready to go home. They bounce back and want to get out and play as soon as they are better. Looking at new data with the research team is a close second. I am extremely lucky to be doing a job that I love, answering important questions about children’s health. What could be better?”