Relationship between DUP and Irish Government ‘not very good’ 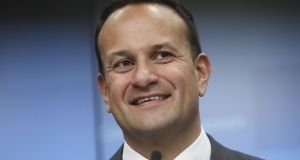 Taoiseach Leo Varadkar. Arlene Foster highlighted his recent attempt to reassure unionists that the constitutional position of the North would be unaffected by the new proposed arrangements. Photograph: Simon Dawson/Bloomberg

DUP leader Arlene Foster has said the relationship between unionists and Fine Gael are not very good.

Speaking to Tommie Gorman for RTÉ’s The Week in Politics programme, Ms Foster was critical of recent comments by members of the Irish Government on Brexit. She said more than 40 per cent of people in Northern Ireland had voted for Brexit.

“I don’t think relationships are very good at the moment. I regret that. I think we’ll have to work to try and to get to a better place.

“As the leader of the largest unionist party it is incumbent on me to try to work at those relationships but some of the things that have been said recently have been detrimental to unionist/Fine Gael relationships.”

Ms Foster highlighted Taoiseach Leo Varadkar’s recent attempt to reassure unionists that the constitutional position of the North would be unaffected by the new proposed arrangements. Mr Varadkar said: “The queen will still be the queen, the pound will still be the pound, people will still post letters in Royal Mail red letter boxes.” The DUP leader dismissed this as a “trite definition of unionism” and her “birthright” as a Britsh citizen.