Brexit: What happened on Tuesday night and what could happen next? 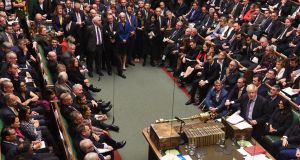 Members of the UK parliament awaiting the results of the vote on the programme motion proposing a timetable for the passage of the Brexit Withdrawl Agreement Bill in the House of Commons in London.

The bill seeking to put Boris Johnson’s Brexit deal into law was passed by MPs in the House of Commons on its second reading, the initial opportunity that MPs have to vote on a bill. It passed by 329 votes to 299, the first time the commons has formally approved a Brexit plan, even though some MPs pointed out they would still seek to have amendments attached at a later stage.

However, only 20 minutes later, MPs rejected the UK government’s so-called programme motion, which set out the accelerated timetable for the bill, by 308 votes in favour to 322 against.

Is it good news for the government that it has won a Brexit deal vote?

In one sense, yes, and responding to the 30-vote majority for the withdrawal agreement bill, or WAB, Johnson praised MPs for having “embraced a deal”. But the defeat on the programme motion by 14 votes – a heavier defeat than many expected – is a definite reverse and has now led to fresh uncertainty. The programme motion was important to the government because it argued the compressed timetable – allowing only three commons days for the entire process – was vital if the UK was to leave the EU by the current deadline of October 31st. Many MPs argued this was far too short a time.

Under the Benn law intended to ward off a no-deal Brexit, Johnson wrote to the EU on Saturday to formally request a delay to departure until January 31st, despite not wanting this to happen. Responding in the commons on Tuesday evening, Johnson said he would “pause this legislation” and await information from the EU on a possible delay. In the interim, he said, no-deal preparations would be ramped up, though this appears more a threat. For now, the bill is “in limbo”, parliament speaker John Bercow said, using what he said was the technical term.

During the debate, Johnson pledged he would pull the bill and seek an election in the event of a delay until January or longer. But he did not promise to do this in any circumstances, holding open the possibility of a brief delay being acceptable. After the vote, Johnson was similarly equivocal, saying: “One way or another, we will leave the EU with this deal.”

Does all this make a general election more likely?

Probably. If the EU insists on a lengthy delay, which is put in place, Johnson could decide to push for an election, though reports this morning say that there are divided views in Downing Street on this. His alternative is to try to get the legislation through, with a short delay. Crucially, if an imminent no-deal Brexit was now averted, Labour would be expected to now back an election.

However, for all his protestations against a longer delay, the 30-vote majority for his Brexit deal could tempt Johnson into trying to push the bill through parliament before an election, allowing him to stand as the prime minister who delivered departure.

Did the government offer any last-minute concessions?

Yes. Closing the debate for the government, the justice secretary, Robert Buckland, promised a last-minute shift aimed at Tory waverers, to give parliament more of a say on avoiding a possible no-deal situation when the transition period ends in December 2020. But this was not enough to rescue the vote.

What will MPs do for the rest of this week?

On Wednesday and Thursday, when they should have been finishing off the stages of the WAB, they will instead return to debating the Queen’s speech.

What is the EU likely to do ?

EU council president Donald Tusk said that he would be recommending an extension – and reports suggested he was in favour of acceding to the request in the letter sent from the UK for this to last until January 31st. However, there is frustration in EU capitals. French president Emmanuel Macron reportedly wants a shorter extension and German foreign minister Heiko Mass referred to the possible need for an extension of a few weeks to allow Johnson to seek to get the legislation through. One option would be to grant a “flextension” , giving the UK up to January 31st but making clear they could leave earlier if the legislation was passed in London and also by the EU parliament.

So the bottom line here? Is this nearly over?

It is possible that Johnson could get the deal through in the next few weeks, though there could be barriers via proposed amendments. If not, a UK general election is the most likely route, with Brexit day delayed – again.