Explainer: What do latest Brexit votes mean for Ireland? 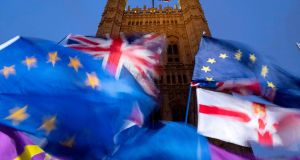 If Boris Johnson loses a key procedural vote on Tuesday then what happens next becomes a bit less predictable. Photograpgh: Getty

There are crucial votes in the House of Commons on Tuesday, with UK prime minister Boris Johnson saying he will withdraw his Brexit deal and call for a general election if his timetable is not agreed by parliament. Below we examine what is likely to happen and what it is likely to mean for Ireland.

There is yet another crucial vote?

Yes. MPs will vote on the withdrawal agreement bill (WAB), their first chance to express an opinion on the deal negotiated by Boris Johnson in Brussels.

If Johnson wins the main vote it will be “game on” in terms of trying to get the deal through.

However, it will be far from over as he would have to maintain this majority in a range of votes to come.

For Ireland, if the deal proceeds and gets final approval, it removes the threat of a no-deal Brexit at the end of this month as the UK, if it leaves under an agreement, moves into a transition period under which nothing changes in practical terms until the end of 2020, at least.

Could it all be over by October 31st?

This is what Boris Johnson is aiming for. He wants to get the legislation through the Commons in three days and then on to the House of Lords.

It seems an impossibly tight timetable and MPs will also get a chance to vote today – assuming Johnson wins the first vote – on how it should be handled.

This vote on what timetable should be followed is called the Programme motion and will be key to whether Johnson can leave by October 31st.

A lot of MPs are speaking out against this timetable. If Johnson loses this procedural vote, then it would become less predictable, as a longer timescale would give MPs more time to table amendments – for example seeking a commitment for the UK to stay in a customs union after Brexit, or even to have a confirmatory vote.

Johnson has said that if the Programme motion is voted down and there is a threat of delay until the end of January – in line with the extension request sent to the EU – then he would pull the whole bill and seek an election. It is not yet clear, however, if he would pull it immediately in the event he lost this vote – as UK reports suggested he had left himself some leeway. The EU, as yet, has said nothing in response to the extension request.

Are there other key points for Ireland?

Yes. If the debate on the bill proceeds, one thing to watch would be the debate about what the WAB says about the transition period. As things stand, this is due to finish at the end of December 2020.

However, this is unlikely to give enough time to negotiate a new trade deal with the EU and MPs may look for a say in seeking an extension, as is allowed fore either one year or two.

The bill, as drafted, does not give them any say, leaving it to the government. For Ireland, this is important as if the UK leaves the transition period without a deal, then we are looking at a kind of no-deal Brexit and the imposition of tariffs as set down in World Trade Organisation schedules. In other words we could be facing another cliff-edge risk at the end of 2020, albeit that the terms of the agreement would protect against the risk of an Irish trade border.

What about the risk of a crash out earlier?

This could happen, but looks less likely. Johnson might not get the legislation through, for example – or might not get it through in time. And the EU might not grant an extension.

MPs, who supported the Letwin amendment at the weekend, showed they did not want a no-deal. And the EU will want to avoid being blamed for a crash-out.So an end-October no-deal looks unlikely.

However, Johnson will threaten MPs that he wants to head in this direction if they do not pass his deal, so nerves could still get frayed over the next week.

And what about the North and the DUP?

We will have to see if Johnson makes any attempt to get the DUP back on board – it doesn’t appear so right now. Some moves to indicate that he would seek a customs union for the whole of the UK after Brexit might help, though the DUP will realise this could all be reversed by a future government.

The bill itself shows a lot still to be decided in how the customs plan agreed as part of the new deal will operate in practice, with a lot left to ministerial discretion.

With news emerging that those sending goods from the North to Britain will have to fill out some forms after Brexit – a change from the current position – the issue of a trade border in the Irish Sea will be a huge focus in the debate.

What about the UK’s long-term relationship with the EU?

This is the next battleground if the agreement is concluded – and one of vital interest to Ireland. Johnson has said he wants tariff-free trade with the EU after Brexit.

But Labour accuse him of seeking a deregulation agenda – and if he does this, and cuts costs, then the EU would be loath to grant UK products tariff-free access. If an early election is called, this will be the key battleground and is a matter of great long term importance to Ireland. The harder the Brexit, the worse the economic impact on Ireland and the trickier the new customs arrangements operating across the Irish Sea will be. And it is vital to note that the kind of free trade agreement envisaged by Johnson will not eliminate the need for the kind of checks put in place under the new agreement, though it might reduce them a bit.

And with a trade deal likely to take several years to negotiate, we will be facing a lot more Brexit and quite possibly a few more cliff edges, even if the withdrawal deal is signed.