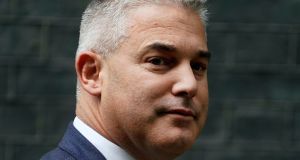 Brexit secretary Steve Barclay has said Northern Irish firms will have to complete exit declarations on goods before transport to the rest of the UK. Photograph: Will Oliver

Northern Irish businesses have expressed concern at the surprise disclosure that they will have to complete exit declarations when sending goods to Britain under the proposed Brexit agreement.

British prime minister Boris Johnson told the House of Commons on Tuesday there would be no checks on goods moving from the North to Britain after the UK left the EU but he added, over loud heckling from unionists in the parliament, that goods would face “some light-touch measures”.

The UK government has been accused of reneging on its commitments on the Brexit deal to allow “unfettered access” to the internal market in Britain for Northern Irish companies with these new bureaucratic measures.

Mr Johnson was responding to queries from DUP deputy leader Nigel Dodds about the revelation by Brexit secretary Steve Barclay on Monday that Northern Irish firms would have to complete exit declarations on goods ahead of their transport from Northern Ireland to the rest of the UK.

Mr Barclay told the House of Lords European Union committee that the “exit summary declarations will be required in terms of NI to GB”, correcting an earlier answer he gave to the committee that trade would be frictionless and that there would not be any declaration forms required after Brexit.

The UK government has not estimated the cost of these information declarations.

It said in an impact assessment of the Brexit deal that the cost of completing customs declarations on goods moving from Britain to Northern Ireland under the post-Brexit arrangements ranged from £15 (€17) to £56 (€65) per declaration.

Exit declaration forms are separate from customs declarations. They are completed by transport companies rather than by importers or exporters for the purposes of security and safety, listing the type and weight of goods in order to keep track of what kind of imports or exports are crossing economic borders.

The purpose of the declarations is to check, under the EU’s union customs code, what goods are leaving the EU to a non-EU state.

Norway, Switzerland and Andorra have agreements in place with the EU waiving their obligation to file entry and exit summary declarations when trading with the EU but where goods leave those countries for a third country, say from Norway to Russia, an exit declaration form would be submitted to the EU.

Business representatives said the exit declarations were not time-intensive or onerous but expressed concerns at the addition administrative burden facing Northern Irish companies from the post-Brexit changes and that the post-Brexit arrangements would create red tape for companies exporting to the rest of the UK.

“It is a way of collecting information. To me, it stinks of the UK gearing itself up for the hardest Brexit. The UK wants to protect the GB market from EU goods going into it so that they have some kind of track of what’s going in,” said Séamus Leheny, policy manager with the Freight Transport Association in Northern Ireland.

Stephen Kelly, chief executive of Manufacturing NI, said he believed this addition administrative burden should not borne by companies in Northern Ireland but firms south of the Border.

“I am not entirely convinced that firms in Northern Ireland should be responsible for this. It is a bit like a stock-take in a retail business: you know what you have ordered and what you have sold, and what is left is fraud or theft. This should be more of an issue for Irish firms recording this information for a third country,” he said.

Mr Kelly said that Northern Irish businesses were calling for a greater understanding of the UK government’s commitment to “unfettered access” to the UK internal market in the Brexit agreement.

“There is no detail on ensuring how that is delivered,” he said.

Northern Ireland’s trade with Britain accounted for 56 per cent of all its trade in goods in 2017 compared with 16 per cent for the Republic of Ireland.