‘Stick to your word’: Johnson’s deal a sensitive topic for DUP 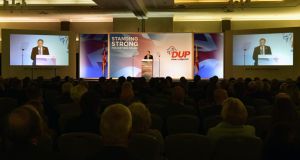 DUP deputy leader Nigel Dodds: ‘We will not accept a Customs Border in the Irish Sea.’ Photograph: Colm Lenaghan/Pacemaker

“Brexit’s in everything,” one delegate to this year’s DUP conference remarked, half in resignation, half in despair.

It is a state of affairs that most in Northern Ireland have become used to in the three and a half years since the Brexit referendum; for the DUP, gathered at the Crowne Plaza hotel in Belfast this weekend, it has been a year in which, in the words of deputy leader Nigel Dodds, the party has been “tried and tested like never before.”

Eleven months ago, Boris Johnson – then MP for Uxbridge, now the British prime minister – was the toast of the conference when he declared that regulatory or customs checks down the Irish Sea would be “damaging the fabric of the union”. No British Conservative government, he said, “could or should sign up to anything of the kind”.

This year, he was on the “naughty step in Parliament” – sent there by the DUP, according to party leader Arlene Foster, twice in the last week, when the party’s 10 votes were instrumental in defeating the government in the British parliament. Nigel Dodds was clear: “stick to your word,” he told Boris Johnson.

“We will not accept a Customs Border in the Irish Sea.”

This was reinforced by the Lagan Valley MP, Jeffrey Donaldson, who told The Irish Times that he wished Mr Johnson had “honoured what he said at the conference last year.”

“We cannot support what is on the table,” he said. “He has let us down badly. The deal would have passed through [the House of Commons] if he had the support of the DUP, so we have stopped him in his tracks.”

Out of the picture

The party would, Mr Donaldson said, be consulting on how to move forward over the weekend, but “we need to hear from the prime minister what his strategy is to address the concerns we have and many in Northern Ireland have.”

While the DUP, he said, was ready for a general election, the priority was to address issues around the Brexit deal, and he warned that in the absence of an election, “we need to sit down with the government and talk to them about what happens with the confidence and supply arrangement.”

“We have seen in the last week how the DUP’s ten votes were crucial, and if they intend to take legislation forward, then they will need the DUP’s votes.” Other delegates were similarly confident about the strength of the DUP’s position, not least 19-year-old politics student and chair of the Democratic Unionist Association at Queen’s University, Belfast, Molly Liggett.

'I’ll probably not see a united Ireland in my time but for my children and grandchildren, I wouldn’t want that for them'

“I think Boris Johnson will stick to his word. It is the Conservative and Unionist party, after all. They do care about the union, but this has to a Brexit for the whole of the UK.”

Yet, she also expresses the hope that those in Great Britain will realise why the current deal is unacceptable to unionists. “It feels like Northern Ireland is always left out of the picture. I hope that will be looked at, and I know the DUP will stand up for us.”

Among others, the language was less diplomatic. “Shafted,” was how one elected representative put it. “We knew [Johnson’s] reputation, and we hoped it wouldn’t happen, but this is what we feared.”

If there was anger, and resignation, there was also sadness, not least from the MP for Strangford, Jim Shannon. He explains that over the two and a half years of the confidence and supply agreement with the Conservative party he had built up friendships with Tory MPs; some of them, he says “haven’t been able to look me in the eye” since.

While he hopes that some of the sticking points in the withdrawal agreement bill will be addressed – “we are in negotiations, we are in discussions, we hope we will have something we can agree on but we can’t agree on what’s before us” – the core issue is one of identity.

He would be, he explains, “less of a unionist today than I was last week if this [bill] was to go forward.”

Others at the conference agreed.

Farmer Leslie Allen, from the Clogher Valley in South Tyrone, said his opposition to the withdrawal agreement was based not just on economics, but his unionist principles: “I’ll probably not see a united Ireland in my time but for my children and grandchildren, I wouldn’t want that for them.”

Arlene Foster arrived on stage to a standing ovation and the sounds of Take That’s Greatest Day; two, small Union flags were waved from the audience as she spoke of “next generation unionism” – the theme for many of the conference’s events.

This, she explained, is the party’s “vision for Northern Ireland entering its next century”; unionism, she said, should be “inclusive, welcoming and embracing to all.” Listening was an emotional Niree McMorris, who manages Gary Middleton MLA’s constituency office in Derry.

“I feel really inspired today. This is the kind of politics I like – it’s inclusive, it includes everybody.

“Yes we are unionists, we want to remain in the UK, but it was very evident that we can do that and still reach out to everyone in the community. “I always knew she was like that, I just knew she had it in her.”