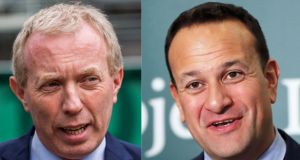 Votegate – the curious story of a Fianna Fail TD voting for his party colleague Timmy Dooley (left) when Dooley wasn’t even in the chamber – has left Leo Varadkar delighted for another Fianna Fáil TD. Photographs: James Forde/The Irish Times and Niall Carson/PA Wire

The Taoiseach has lovely manners.

“At the outset, I just wanted to congratulate deputy Haughey on his recent, erm, recent promotion,” declared Leo at the start of questions on the recent European Council meeting, generously recognising the Fianna Fáil (FF) deputy for Dublin Bay North’s surprise elevation to his party’s front bench.

Leo was really, really delighted for Sean Haughey, who used to be his party’s dynamic deputy-vice spokesperson (acting up) for Whatchamacallit and Thingamabob in Europe.

That was until Monday, when greatness was thrust upon him. Sean Haughey fearlessly answered the call.

The Taoiseach felt he had to mark the occasion with a formal word in the House for the man sitting directly opposite him in the seat which would have been normally occupied by his predecessor Timmy Dooley, former FF spokesman on foreign affairs.

Unfortunately, Timmy also abnormally occupied the seat. This is now the subject of an Oireachtas “Votegate” investigation, the result of which is published on Thursday morning.

Leo was taking no pleasure in this. Definitely not.

The discovery of Schrodooley’s Seat – wherein a TD from Clare could be deemed to have voted and not voted at the same time until found out – led to Timmy’s demotion from the front bench on Monday and paved the way for Sean Haughey’s big break.

Honestly, Leo was so pleased for Sean. As he finished his kind words, beaming from ear to ear, the Taoiseach became quite overcome. He couldn’t speak.

“Ah, heh-heh-heh . . . huh-huh . . . ha-ha-hemm,” he continued, struggling out the giggles, gasping for a quick breath before pulling himself together for Sean’s sake.

It was a very touching moment.

Ruined, of course, by Fine Gael backbencher Alan Farrell, who was deputising in the chair and had to stick his oar in.

“Make sure to vote in the right seat!” Farrell chortled over at the placid Haughey, who immediately cut the grinning Chairman down to size with a coruscating example of his legendary rapier wit. Of course he didn’t, but as Sean was in Schrodooley’s Seat, maybe he did . . .

Farrell was referring to the Dáil’s War of the Buttons, which went into an uneasy truce on Wednesday because a major battle is on the cards for Thursday and the troops wanted to take a bit of a rest.

The situation was also relatively calm because some TDs sensibly realised they made a show of themselves on Tuesday over what has become known as Votegate – the curious story of Fianna Fail’s Niall Collins voting for his party colleague Timmy Dooley when Dooley wasn’t even in the chamber.

Events leading to the carting off of Collins and the defenestration of Dooley are down for an 80 minute session on Thursday afternoon. That’s right, an hour and twenty minutes. Loins are being girded.

It’s going to be box-office.

Hopefully all the excited TDs, delighted journalists and cheesed-off Leinster House staff will be in situ for the event and won’t have been poisoned before the off.

The contamination of the water supply in parts of the Greater Dublin area and some adjoining counties was one of the chief topics up for discussion in the chamber.

With a boil water notice issued to over half a million customers in parts of Dublin, Kildare and Meath, questions about when the service can be resumed were asked during Leaders’ Questions by Sinn Féin’s Mary Lou McDonald and Fianna Fail’s Dara Calleary, standing in for his leader who was attending a family event.

Both Mary Lou and the Taoiseach revealed they have skin (or maybe scum) in the game. She said the boil water notice affects her constituency and her own home, while he said his home and his family home in West Dublin was also hit by the problem.

Some people might, rightly, ask what is the problem where these TDs are concerned. Haven’t they built up years of resistance and anti-bodies to the known consequences of dirty water?

But no. This is a common misconception which relate to terrible ongoing emissions of a different kind.

If there was a cure for verbal diarrhoea they would have put Imodium in the Dail’s drinking water years ago. A small corner in the chamber is reserved for the Trots, who are most welcome. Its manifestation may be a pain for everyone else but doesn’t bother the politicians, who thrive on it. And it practically keeps them going in the Seanad.

Happily the good news was emailed to everyone in Leinster House at midday on Tuesday.

“Facilities Management Unit has confirmed with Irish Water that Leinster House and all buildings in the Oireachtas complex are outside the area affected by the Irish Water ‘Boil Water Notice’ – the nearest affected area is north of the North Circular Road.”

A crushing blow for sales in the Dáil bar where staff were hoping for an upturn from worried senators and deputies ordering hard liquor to combat the threat of stray microbes in their water.

Mind you, they survived the Dáil rat, so a bit of cryptosporidium probably wouldn’t do them much harm.