Decision on e-scooter law is on the way, Government says

Fianna Fáil: the vehicles are effective, efficient and help to ease congestion 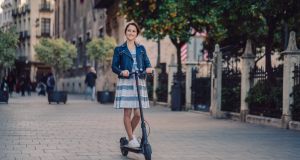 A decision will be made “in a very quick time” about whether or not to amend the law to regulate the use of electric scooters on Irish roads.

Minister for Transport Shane Ross said that “safety is paramount on this issue” and he had asked the Road Safety Authority to research how e-scooters are regulated in other countries particularly other EU Member States.

The Minister said “I need to be satisfied that permitting such vehicles on our roads will not give rise to safety concerns for users and for all other road users including cyclists, pedestrians, and motorists”.

Mr Ross said Barcelona has banned them. Paris and Berlin have imposed restrictions because of safety concerns as well as the interaction of e-scooters with other traffic.

“It’s not quite as simple as it may appear on the surface to just say that they should be regulated in a certain way.”

He acknowledged that Fianna Fáil transport spokesman Robert Troy had drafted legislation which he is introducing in the Dáil to regulate the use of such scooters on Irish roads and and he would consider the Bill, which would add to and inform a complicated debate.

Mr Troy, who raised the issue during transport question time said the use of e-scooters was rising rapidly because they were efficient, mobile and low cost.

He pointed to a media report that a 3km journey from Phoenix park to College Green in rush hour traffic took 10 minutes. “It’s no wonder people are using them,” he said.

When Mr Ross said he would make a decision about e-scooters “when I have received the authority’s research, not before then” Mr Troy accused the Department of Transport of “once again reacting to a trend”.

“We’re not asking you to reinvent the wheel, just asking you to bring a similar regulation to ensure that they can be used in a safe manner in our own country,” the Fianna Fáil spokesman said.

Mr Ross said he could understand Mr Troy’s impatience but it was very important that they get the issue right.

But the Minister rejected his accusation of being slow. “It’s been a pretty sudden explosion of these particular vehicles,” he said. Various countries had reacted differently to the “flood” of these scooters.

He asked when his legislation could be considered for discussion.

“We will decide in a very quick time” but “safety is paramount on this issue”.

“We don’t want to see the sort of incidents we’ve seen elsewhere – accidents caused by these vehicles.”

He said there was ambiguity and “that ambiguity is precisely what will end up being challenged in court and it, therefore, needs to be clarified in law urgently”.

Mr Ross again said he would not take a position until he got the Road Safety Authority’s advice and he dismissed Mr Rock’s view as “populist” and without evidence.

The Fine Gael TD had said that allowing scooters would reduce traffic congestion but the Minister said those using e-scooters “ are swapping from bicycles, buses and other means of public transport. They are possibly taking up space.”