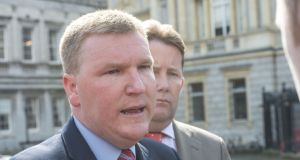 Fianna Fáil’s McGrath told the Dáil the Fiscal Advisory Council and the Department of Public Expenditure and Reform had warned that the Government’s medium-term plans were not credible ahead of this year’s budget. File Photograph: Brenda Fitzsimons/The Irish Times

The Government has made unfunded commitments costing more than €4 billion with money that it simply does not have, Fianna Fáil has claimed.

The party’s finance spokesman Michael McGrath told the Dáil the figures “leave a very big hole” in the Government’s budget. He said the national broadband plan required an extra €500 million over the next three years and €1.6 billion up to 2027, and the national children’s hospital would need an extra €900 million.

Mr McGrath said the Fiscal Advisory Council, the Government’s economic watchdog, and the Department of Public Expenditure and Reform had warned that the Government’s medium-term plans were not credible ahead of this year’s budget.

The Cork South-Central TD said overspending on broadband and the children’s hospital and the Taoiseach’s pledge of some €2 billion in tax cuts in the next budget meant there was a commitment of more than €4 billion of unfunded money.

He said this was at a time when economists were warning of a slowdown with the fallout from the risk of a no deal Brexit.

Taoiseach Leo Varadkar insisted the Government had cut the exchequer deficit while Fianna Fáil in government had quadrupled the national debt and increased the deficit to 10 per cent.

He said that Project Ireland 2040 made provisions for contingencies. He could not remember the exact figure but it was of the order of €5 billion, €6 billion or €7 billion which would be available if needed as part of the capital programme.

And he said the “most important news of the day” was the Labour Force Survey which showed 2.3 million people were at work, more than ever before.

Mr Varadkar said this was evidence of the economy doing well and being well managed. “We will have a budget surplus this year and will reduce our debt that your party quadrupled,” he told Mr McGrath.

He said the employment levels would help fund future projects and that provided the good economic numbers continue “and we’re not blown off course by Brexit” the Government is “in a good position to put together a budget in September”.