What has your MEP been doing for the last five years?

We examine attendance, questions, work on debates and committees 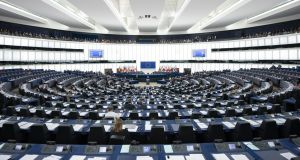 Eleven MEPs were elected to the European parliament following the last election in 2014 and seven of them are currently seeking re-election.

MEPs are paid €8,611.31 a month in gross salary, plus a pension, and on leaving the parliament they receive a transition allowance worth up to €206,664, depending on the length of service.

Information published by the European Parliament on its website gives an insight into what it describes as the “main” and “other activities” of Irish MEPs over the past five years.

While this is not the full picture of an MEP’s work, as they also sit on committees and have other duties assigned that will take up their time, it does provide an insight into how active MEPs have been in the following areas.

How good have MEPs been at turning up to parliament?
Plenary sessions, where the parliament formally sits to vote on EU legislation and adopt its position on political issues, take place once a month in Strasbourg, France, for a four-day part-session from Monday to Thursday, and additional part-sessions are held in Brussels. All members are required to attend these.

Sean Kelly has the highest attendance rate of Irish MEPs, attending 96 per cent of the 279 sessions held since June 2014. Brian Crowley attended just two of the 278 plenary sessions, attending Strasbourg on September 18th, 2014, and December 18th, 2014. Mr Crowley was excused from all other plenary sittings by the president of the European Parliament. The president can excuse members from attending plenary sittings on grounds such as ill-health, serious family circumstances, maternity leave, or if the member is required elsewhere on behalf of the parliament. Mr Crowley has spoken in the past about the severe medical problems he has faced, and how they prevented him attending Parliament in recent years, but not from working, often from his hospital bed.

Contributions to plenary debates
The number of times an MEP speaks during plenary sessions and makes written declarations relating to the plenary debates are recorded by the European Parliament. Mairead McGuinness, who has served as vice-president of the European Parliament since 2017, has the greatest number of contributions of all Irish MEPs. This is in part due to the fact that many of her contributions are responses to other members’ speeches and questions, along with making points of order. As the EU Parliament data shows, Ms McGuinness is closely followed by Fine Gael party colleague Mr Kelly, while Independent Nessa Childers and Mr Crowley have made the lowest number of contributions to plenary sessions.

Work on reports
MEPs can also act as rapporteurs and/or shadow rapporteurs. A rapporteur is the person on a parliamentary committee who drafts a report on proposals of a legislative or budgetary nature, or on many other issues. They can consult with experts and stakeholders on a given issue while drafting their report and are also responsible for drafting compromise amendments and negotiations with shadow rapporteurs. Reports adopted at committee level are then examined and voted on in plenary.

Work on opinions
As with reports, acting as a rapporteur and shadow rapporteur on opinions is also listed by the European Parliament as a key parliamentary activity. As explained by the European Parliament, “Committees may draft an opinion to a report of the responsible committee covering the elements linked to their committee remit. Rapporteurs of such opinions are also responsible for the drafting of compromise amendments and negotiations with shadow rapporteurs of the opinion”. Midlands-North-West MEP Marian Harkin has undertaken the role of opinions rapporteur the greatest number of times (20) of all current MEPs, while Ms Ní Riada has been appointed as shadow rapporteur for opinions 67 times.

Written explanations of vote
Written explanations of vote fall under “Other parliamentary activities” on the European Parliament’s website. MEPs can submit an explanation on why they voted in a particular way, or why they abstained on any of the votes held in the plenary. There is no limit to how long an MEP’s explanation can be. Independent MEP Luke Ming Flanagan has written the highest number of explanations of all Irish MEPs for his voting decisions, most of which are several lines long. In comparison, those of Mr Hayes and Mr Kelly are much shorter with many of the Fine Gael MEPs’ explanation of vote summed in one line such as Mr Hayes’s “I am voting in favour of this report as I have no objections” and Mr Kelly’s “I voted in favour of this report”.

Questions for a written answer
These questions can be put forward by an individual member, group, or parliamentary committee to the president of the European Council, the Commission or the Vice-President of the Commission/High Representative of the Union for Foreign Affairs and Security Policy. Answers are then given to the questions in writing. The questions vary hugely from, EU trade with Israeli settlements to use of funds at a film academy in North Macedonia. Sinn Féin’s Matt Carthy has put forward the most questions, followed by party colleague Lynn Boylan, with Sean Kelly and Brian Crowley submitting the lowest number of questions for a written answer at 57 and 32 respectively.- This article was produced in conjunction with UCD Data Journalism