Micheál Martin says government must be formed within weeks

‘The bottom line is we had a general election, we had a result,’ says FF leader 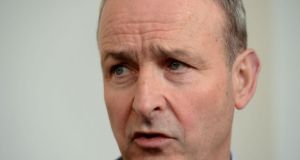 Micheál Martin: Over the next couple of weeks “We need to put a government together because of the magnitude of the decisions that have to be taken.”

Fianna Fáil leader Micheál Martin has said that the bottom line is that a new government will need to be formed in the next few weeks with policies that are sustainable.

Mr Martin told Newstalk Breakfast that legislation cannot be passed after Thursday when the Seanad concludes its term.

“The bottom line is we had a general election, we had a result.”

Fine Gael has now given its negotiators the authority to go into talks with Fianna Fáil and other parties can get involved, he said. “We have to continue to work on that. The talks today could form the basis for forming a programme for government.”

Mr Martin said all the political leaders are focusing on the Covid-19 crisis and were working in tandem with the Government and the HSE.

It was obvious that at some stage the country will need a government with a solid majority to make decisions in the weeks ahead, he said.

The economic dimension of the impact of the virus has not yet been fully revealed, he added. How much will revenue be down?

“Over the next couple of weeks we need to put a government together because of the magnitude of the decisions that have to be taken.”