Number testing positives jumps by over 200 for second day in a row, while another fatality is recorded

An Taoiseach Leo Varadkar has announced a series of new measures - while also extending current restrictions until April 19th - in an attempt to combat the coronavirus pandemic. Video: RTÉ 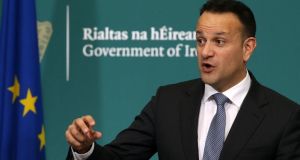 A drastic curtailment of commercial and social activity and massive package of aid to the stricken economy have been unveiled by the Government to combat the spread of coronavirus and to alleviate the economic hardship the pandemic has brought.

Ministers and officials said there were signs that social distancing was beginning to have an effect. But the numbers testing positive for the virus jumped by more than 200 for the second day in a row, while another fatality was recorded in the east of the country. This brings the total number of deaths to seven.

There are now 1,329 confirmed cases of Covid-19 in Ireland, officials confirmed on Tuesday night.

They also said people seeking testing for coronavirus in future will have to display two significant symptoms rather than one before they are referred, following a change in how those deemed suitable for testing are selected.

Patients will have to show fever and at least one sign of respiratory disease – such as cough or shortness of breath – before they can be referred for testing, under a change recommended by the National Public Health Emergency Team.

The new restrictions announced on Tuesday, which require closure of all “non-essential” retail businesses while people are being urged to remain at home, will effectively shut down whole swathes of the economy in a bid to slow the advance of the virus to allow the health service cope.

The measures are accompanied by a vast package of aid for businesses and those who have lost their jobs as a result of Covid-19.

The scheme, which will last for three months, is intended to keep workers with their employers to enable a faster recovery once the outbreak recedes.

There is to be a special provision for childcare workers who will see the State pay all their wages so that parents cannot be asked to continue paying creche fees for the next three months.

Creches will be expected to assure parents that their child’s places will be secure at the end of the crisis, providing that the creche is still trading. Creches which have let childcare workers go will also be expected to make efforts to hire back the workers who were made unemployed.

The aim of the scheme is to ensure that the childcare worker is in a position to provide continuity of care and creches reopen their doors once the crisis passes, and to provide ongoing employment for workers in the sector.

The landmark package will also mean childcare providers are given funding equivalent to 15 per cent of their staff costs to pay for other expenses, including rent, utility bills and loan repayments where applicable.

Minister for Children Katherine Zappone, who lost her Dáil seat at the general election but remains a member of the Government like other Ministers, is said to have “dug in” at Tuesday’s Cabinet meeting on the issue.

Ms Zappone is understood to have raised concerns that workers could leave the childcare sector due to the low wages in the industry.

Right thing to do

Mr Varadkar said the cost of these schemes would be “great”.

“But we can bear it, and we will be able to pay it back as a nation. We do so willingly because it is the right thing to do, and because we owe it to our fellow citizens.”

The Cabinet was told, as it signed off on the measures on Tuesday, that the increased welfare payments and income support schemes would cost €300 million per week for 12 weeks – with a total cost nearing €4 billion.

Mr Varadkar said the income support scheme would maintain the link between employees and employers and “will make it easier for us to bounce back when this is all over”. The self-employed will also be covered.

Minister for Social Protection Regina Doherty said an estimate she made last week that 400,000 people would lose their jobs was “conservative”.

The Irish Times understands that a memo to Tuesday’s Cabinet meeting said about 500,000 could lose their jobs, but the Government intends that a large portion of there people will avail of the income and welfare supports outlined.

Ministers were also told that the income support scheme could be open to “significant . . . abuse” of exchequer resources, but that this was a risk worth taking due to effects of not taking significant action.

It is also understood that 118,000 people have already submitted claims for the special Covid-19 unemployment benefit which was announced a week or so ago.

The shutdown measures announced on Tuesday go much further than previous restrictions. But they were not unexpected after similar moves across Europe and the dramatic lockdown announced by British prime minister Boris Johnson on Monday night.

The Irish Government’s restrictions are not quite as draconian but will still require an unprecedented cessation of commercial and social activity. Factories and construction sites will continue to operate, but will be required to adhere to physical distancing.

And the emergency measures continued on Tuesday night when Minister for Housing and Planning Eoghan Murphy said he would make orders to clear the way for the construction of temporary health facilities and allow restaurants to function as takeaways without obtaining planning permission.

At a meeting of party leaders earlier this week, Government secretary general Martin Fraserwarned that additional emergency legislation would be needed in the coming weeks.

Mr Fraser also told leaders that in the absence of a new taoiseach who can appoint 11 Senators, the Seanad would not be properly constituted from next week.