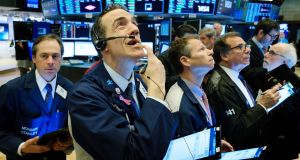 The Iseq in Dublin surged by about 4 per cent while other European markets also gained, as a historic early rebound in European financial markets strived for momentum on Wednesday.

Bourses across Europe kicked off the day on a high note after the US Congress struck a deal to provide $2 trillion (€1.8 trillion) in relief to taxpayers and businesses. The rally had lost steam before lunch time, but several markets had edged ahead again by closing.

Meanwhile, US stocks moved higher in another day of bumpy trading as Congress moved closer to passing the relief package. Markets in the US recorded their first back-to-back gain since a brutal sell-off began last month.

The S&P 500 was up more than 2 per cent in early afternoon after drifting up and down throughout the morning.

In currencies, sterling has tumbled to its lowest level on record against the currencies of the UK’s major trading partners. Sterling’s broad effective exchange rate, measured against a basket of currencies corresponding to the UK’s trade flows, hit a low of 72.9 on Tuesday, according to the daily reading compiled by the Bank of England, although it regained a little ground on Wednesday to 74.4.

Earlier on Wednesday, the Iseq was ahead by 5.8 per cent in the morning before slipping back sharply, and then gaining again ahead of the close. The continent-wide Stoxx 600 was up more than 3 per cent. The FTSE in London was up almost 4.5 per cent.

In Dublin, AIB, which fell 24 per cent in a single day last week, rose 14.5 per cent in early trading on Wednesday and finished the session 11.5 per cent ahead. Bank of Ireland advanced 11 per cent.

Hotel group Dalata surged by 24 per cent to recover some of the ground it lost recently, after a trading update on its cash buffers and moves to mitigate the effects of the virus. CRH, which generates most of its earnings in North America, gained 7.6 per cent early in the session but slipped back to 6.1 per cent by close.

The rally by European stocks since the start of trading on Tuesday still left the market more than 25 per cent from its record high last month in the biggest rout since the financial crisis, with another global recession looming in the face of a collapse in business activity in March.

Earlier, Asian shares also gained on the back of the unprecedented US stimulus plan.

“No doubt it’s a positive development that they’ve agreed ... But once it is approved the question is how it is implemented,” said Jason Teh, chief investment officer at Vertium Asset Management in Sydney.

“It’s good the authorities are going to throw everything at it. But if the virus is not controlled in the US, then they’re going to have to throw another trillion dollars.”