Foster does not rule out agreeing to Irish language Act 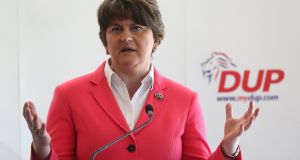 Democratic Unionist Party leader Arlene Foster has not ruled out agreeing to an Irish language Act.

Speaking in east Belfast where she launched the party’s Westminster election campaign, Ms Foster said the matter should be addressed in the wider context of culture and language and “cultural tolerance”.

“We need to respect, not just tolerate, all cultures in Northern Ireland, and that includes Ulster Scots, the Orange and British cultures.”

In February Ms Foster said more people spoke Polish than Irish in Northern Ireland, and declared the party would never agree to an Act protecting the language, a key Sinn Féin aim in negotiations to restore powersharing.

However, she said last month that she was left feeling “uplifted” after meeting Irish language pupils in Co Down. She met staff and students at Our Lady’s Grammar School in Newry in a bid to better understand the attraction the language held for people of different backgrounds.

Ms Foster said the Westminster election was an opportunity for unionism to “get back on the right track” after Sinn Féin came within one seat of the DUP in the March Assembly poll.

Ms Foster warned against unionist division, and said the March election when Sinn Féin came within fewer than 1,200 votes of the overall DUP vote was a “wake-up call” for unionism.

“The stakes could not be higher for unionism and for Northern Ireland,” she said.

“The Westminster election gives unionism the chance to get back on the right track. A general election is not a Border poll, but it is inevitably a referendum on Northern Ireland’s place in the UK,” said Ms Foster in east Belfast.

“March’s Assembly election result bucked the trend of all recent elections where unionism had been gaining and nationalism seemed to be in decline. That is why it is essential that we can persuade people to go out and vote in every constituency across the province.”

Ms Foster said were a Border poll called, unionism would win it “resoundingly”. But no such poll should be called because it “would cause instability”.

She said she was looking forward to the election because she believed it would lead to a “marvellous result” for unionism. She believed that after the March Assembly election, unionists were fully conscious of how high the political stakes were.

In the last Westminster election the DUP won eight seats compared to Sinn Féin’s four. However, Ms Foster said that Sinn Féin was “emboldened” by the March result, and took the election as a “mandate to stop the re-formation of an Executive unless every last one of their demands were met”.

“At this election we will seek a mandate for the union that really matters – the union with Great Britain, to make sure Northern Ireland gets the best Brexit deal, and to reach an honourable and not a one-sided deal to get the Assembly up and running again to deal with the real problems that are faced by people in their everyday lives.”

Ms Foster said the DUP needed “unionists who stayed at home or voted for other unionist parties to unite behind their strongest unionist team”.

“If nothing else the outcome of that election [March] proved that people’s votes at the ballot box really mattered, and every vote was vital. Unionism suffered through division, through vote-split, and through a failure to transfer within the unionist community.”

Ms Foster referred to how the DUP and the Ulster Unionist Party under its new leader Robin Swann failed to agree an election pact. However, she added that there were unilateral deals, with the DUP standing aside in Fermanagh-South Tyrone to give the UUP outgoing MP Tom Elliott a free run against Sinn Féin, while in North Belfast the UUP stood aside in favour of the outgoing DUP MP Nigel Dodds.

Ms Foster said time was too short to forge a deal with Mr Swann, but said “this campaign must be about selling the merits of the union, and we must not fall into the trap of attacking fellow unionists”.

She said that after the election the DUP was willing to “engage positively with other fellow unionists on a range of issues”.

Ms Foster said that regarding the talks after the election, the question remained whether Sinn Féin and its leader Gerry Adams genuinely wanted to restore devolution. The DUP wanted to reinstate the Northern Executive and make it work, “but the question is, will we have a partner to do it with?”

“Make no mistake, elections matter. On this occasion it does not appear likely that our votes will be required to help form a government at Westminster, but the implications for politics in Northern Ireland could not be greater.

“What we need is a mandate for unionism, for a deal to get Northern Ireland back on track, and for the restoration of the Assembly and Executive.”

DUP deputy leader Nigel Dodds said some Remain politicians were seeking to make the election a rerun of the Brexit referendum.

“That decision has been taken. Our job now is not to refight old battles but to use our mandate and our influence to get the best deal for Northern Ireland.”

He said the DUP would work to get the best agreement for Northern Ireland “recognising that we share a land frontier with the Republic, and the particular circumstances of our unique history and geography”.