Ahead of Westminster elections, Michelle O’Neill says Irish unity ‘firmly on the agenda’ 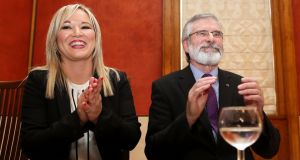 Gerry Adams has launched Sinn Féin’s Westminster election campaign by accusing the DUP and Ulster Unionist Party of ignoring the damage Brexit will do to jobs and business.

Sinn Féin’s leader in the North, Michelle O’Neill, also speaking at the launch in Newry on Thursday night said the Westminster poll next month can be “another ground-breaking” election for her party.

“Interestingly enough, that’s the same interest being promoted by the DUP and the UUP. Both these parties are for Brexit. Surely by now they see the folly of this position,” he added. “Surely they have twigged on to the serious damage Brexit will do to jobs and business, especially to agriculture and the agri-food sector.

“Will the leaders of unionism admit this?” he asked. “Is the pope a Catholic? But we know from all the sectors which will be hardest hit by Brexit how concerned they are. So this election is an opportunity to put forward our alternative and to point out that the Democratic Unionist Party and the Ulster Unionist Party are ignoring the vote of the people of the North – their people.

“Last June the majority of citizens in the North voted to remain. We have to defend that democratic vote. Our task must be to challenge those parties that support Brexit.”

Ms O’Neill referred to how in the March Assembly election Sinn Féin was just one seat and in terms of overall vote less than 1,200 votes behind the DUP.

“The recent Assembly election has activated a transformation unimaginable to the founders of the Northern state. We must keep the momentum going,” she told supporters.

She said she was “confident that as the consequences of Brexit become clearer more and more people from a unionist background will be open to the idea of exploring new relationships on this island.

“We need to be intelligently putting the argument for unity and for a referendum as set out in the Good Friday agreement,” she said.

“Irish unity is now firmly on the agenda, and rights and equality have been put at the top of the political agenda. It is of critical importance that Sinn Féin actively seeks to win social, economic and cultural rights for everyone,” she added.

In the last Westminster election Sinn Féin lost Fermanagh-South Tyrone, dropping from five to four seats. Ms O’Neill said her party was determined to win additional seats in the June 8th poll, including the “historic Fermanagh-South Tyrone constituency whose people elected Bobby Sands; and North Belfast, with a fantastic candidate in John Finucane”.

Ms O’Neill said the election was called by the British prime minister Theresa May for all the wrong reasons. “It is only in the self-interests of the Tory party who have no regard whatsoever for the people of the North, our interests or our future,” she said.

“This is an opportunity to reject Theresa May and her local allies in the DUP and the UUP who want to hold this society back,” she added.

“It is possible for the North to stay in the EU through designated special status, and our senior leadership have been on a diplomatic offensive arguing this case among the EU27 who will determine the British exit terms from the EU.”